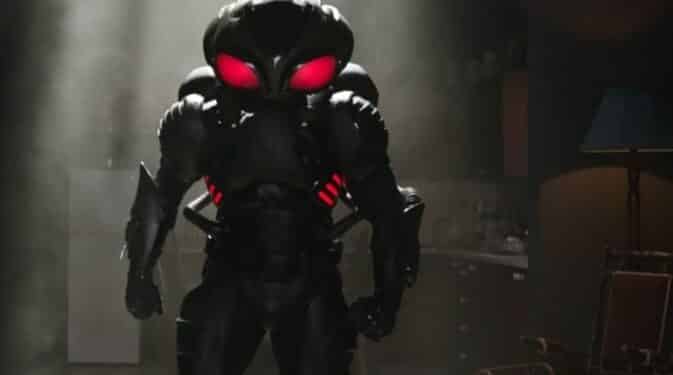 DC Fandome 2021 gave us some of the first looks at many anticipated projects. We got the first full trailer for Matt Reeves’ The Batman, a teaser for The Flash, a trailer for Peacemaker on HBO Max, and our very first look at Dwayne ‘The Rock’ Johnson as Black Adam. We also got a look at The King of Atlantis’ sequel, Aquaman and The Lost Kingdom. We also got our first look at the new and improved (and out for revenge) Black Manta!

Wanting to share this with the world, director James Wan took to Instagram to share a still image of Manta and his new look, including black two piece trident. The look in the first film had fans excited, as it was very comic book accurate- but somehow they upped their game and have given us something that looks ripped right off of the page. This character was one that many fans felt would look terrible in real life and expected a change. Instead, he is one of the coolest looking villains we have seen from any comic book movie to date!

Black Manta looks incredibly intimidating and should be a huge threat for this film. A threat so big that Aquaman has to team up with his imprisoned brother, Ocean Master.

While there is some controversy over this film revolving around a certain cast member, so much so that there is an active boycott for this movie, James Wan looks to give fans one of the most epic DC films to date with this flick and hopes to encourage people into theaters upon its release with images of the production and all of the hard work of every member of the crew.

From the costumes to the set design to the lighting to the cinematography, this film looks to take a major leap forward for their first outing and give us a sprawling epic with a terrifying villain in Black Manta.

What do you think of Black Manta’s new look for Aquaman and The Lost Kingdom? Let us know in the comments below!