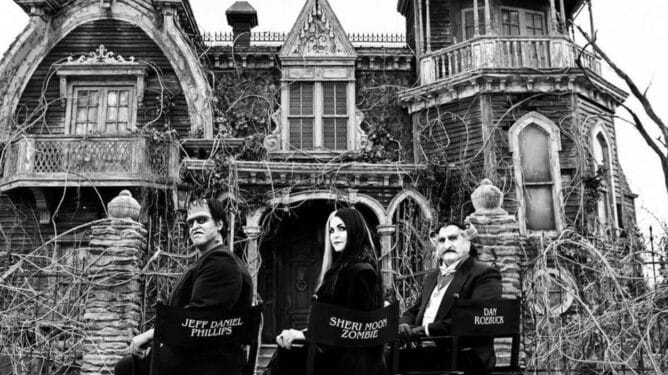 It isn’t any surprise that Rob Zombie is a diehard fan of The Munsters. He did sing the song Dragula, after all. But now Rob Zombie is going to put his love of the classic television series to the test – as he’s developing a film adaptation based on the iconic monster family. Rob Zombie has previously shared glimpses at the film’s set production and costume designs, but now he’s given our first look at three beloved Munsters characters and the cast members that will be portraying them.

As you can see below, Rob Zombie has revealed that Jeff Daniel Phillips will be playing Herman Munster, Sheri Moon Zombie will be playing his wife Lily Munster, and Daniel Roebuck will be playing Grandpa Munster. The three cast members are also sitting in front of the newly constructed 1313 Mockingbird Lane exterior, and it’s a beautiful recreation of the house from the TV series. If this first look is any indication, The Munsters will be both a faithful yet inspired take on the classic series.

It’s been previously rumored that aside from Jeff Daniel Phillips, Sheri Moon Zombie, and Daniel Roebuck, that Richard Brake, Jorge Garcia and Cassandra (Elvira) Peterson would also be joining the cast. As such, it’ll be interesting if those rumors also turn out to be true. While we wait for confirmation or further news on the project, fans can stay tuned to ScreenGeek for updates as we have them.