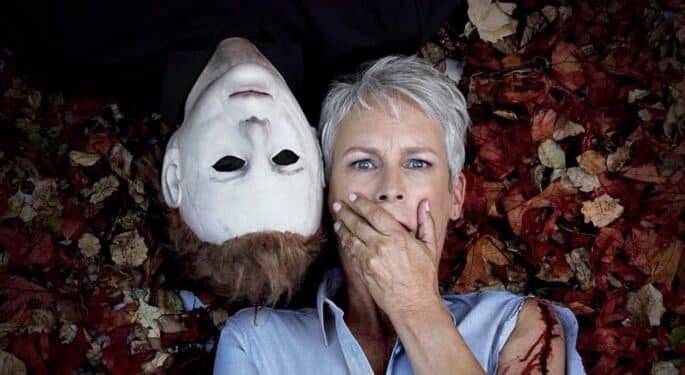 Halloween Kills is currently rocking both theaters and the Peacock streaming service, a sequel to the incredibly successful 2018 Halloween which is a direct sequel to John Carpenter’s classic film of the same name. While this new franchise ignores all of the sequels and thus all of the convoluted and confusing storylines established therein, the plan is for this trilogy to be a true end to the arc between Laurie Strode and killer Michael Myers. In fact, the final film is called Halloween Ends, and even though Blumhouse wants to continue on the franchise beyond this, a new theory postulates that this story can only truly end one way.

The theory, from ScreenRant, supposes that to truly live up to the title of the third film and finally bring a completed end to the Myers/Strode entanglement, they must kill off both Michael Myers AND Laurie Strode. The two characters are truly interconnected and it would seem that the likely course would be a Voldermort/Harry Potter kind of “one cannot survive whilst the other lives” sort of situation. However, in this case, that is a bit flipped in pure horror movie fashion as “one cannot be killed whilst the other lives”.

Halloween Kills seemed to dip back into the supernatural parts of the other sequels just a bit with Myers somehow surviving multiple fatal attacks that would kill multiple people. It is also noted that he seems to become ‘more powerful’ with every kill. And he is stuck on killing Jamie Lee Curtis’ Laurie. So the theory suggests that Strode would need to make the ultimate sacrifice to finally kill Myers are truly bring an end to this saga.

This theory does seem like the likely end here. While the studio wants to make more films for this franchise, there are currently no plans beyond this third film. And, even if they do plan more movies, Halloween Ends is still meant to be the conclusion to the four decades long battle between Strode and Myers. It only seems fitting that they both go out together to end it all.

What do you think of this Halloween Ends theory? Let us know in the comments below!