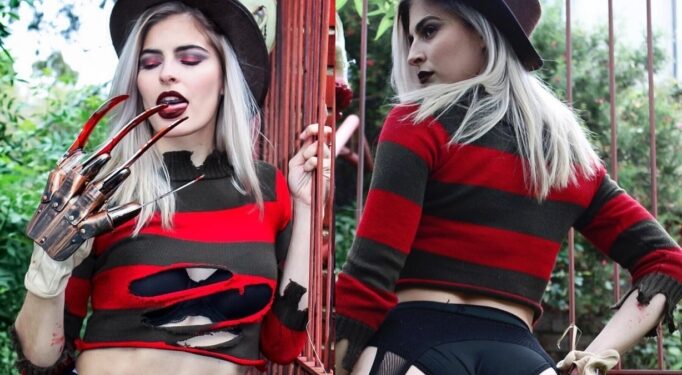 The Nightmare on Elm Street franchise has without a doubt left its mark on horror cinema. With the release of A Nightmare on Elm Street in 1984, filmmaker Wes Craven immediately created a horror icon when he cast Robert Englund as Freddy Krueger. The character quickly became world-famous, spawning a spree of sequels, his own television series, and countless books and comics that further fleshed out the franchise. He even went head-to-head with fellow horror icon, Jason Voorhees of Friday the 13th fame, in the 2003 film Freddy vs Jason. It’s no surprise that fans have been putting their own twists on the character, and one such twist comes from cosplayer Teena Titan. She created her very own female Freddy Krueger cosplay.

One of the reasons Freddy Krueger became such a horror icon is that he features many memorable visual elements. For example, he has his fedora hat, red and green striped sweater, and razor-bladed glove. Those three things have stayed more or less consistent throughout all of his appearances, no matter the medium. The following cosplay is proof that Freddy Krueger is still identifiable, no matter how feminine or sexualized, by these characteristics. You don’t have to feature any burns whatsoever and it’s clear as day that you’re still portraying Freddy Krueger. This is especially the case with Teena Titan and her Freddy Krueger cosplay.

Although Robert Englund will more than likely remain everyone’s favorite and definitive take on Freddy Krueger, it’s great to see how his look has become so recognizable. He’s as iconic as Count Dracula or the monster from Frankenstein. It doesn’t matter if it’s a spicy photoshoot – that eerie red and green sweater still vividly calls to mind that specific dream demon. And if that’s not a testament to how great a character Freddy Krueger is, then I’m not sure what is.

All the same, it’s great to see a cosplayer keep the love for the character alive with her own fun interpretation. Hopefully it’s this kind of love and support for the character that will eventually allow Freddy Krueger to make a comeback with another Nightmare on Elm Street film someday.