Marvel Just Revealed The Fastest Character In The Comics

When it comes to speedsters in Marvel Comics, they haven’t had their powers fleshed out like those of the Speed Force in DC. Each speedster seemingly gets their power from something or somewhere different, and the debate over who is the fastest is one that Marvel really doesn’t address too much. Even with the introduction of Blur, Marvel’s version of The Flash, Marvel has never really put too much into who is truly the fastest in their universe. However, with just one panel in a new comic, that question has been answered. And is is definitely not who anyone would think it is.

In Avengers #50 (via CBR), Deathlok lets Robbie Reyes, the current Ghost Rider, know that his Hellcharger, his car powered by the Spirit of Vengeance, can outrun anything in the known universe if fully unleashed. This would make the Ghost Rider, by extension, the fastest character in all of Marvel. 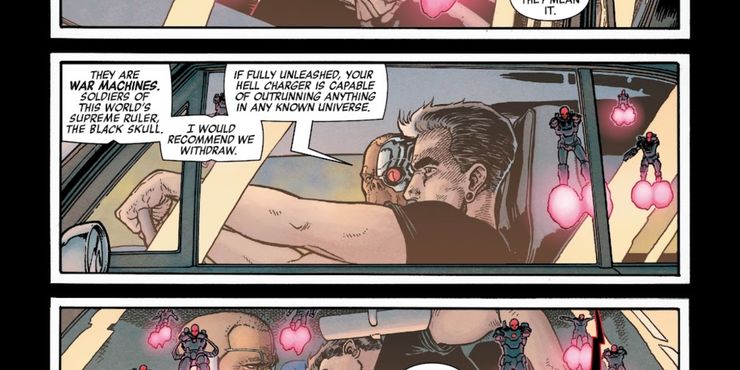 This brings a whole new dimension to Robbie’s run as Ghost Rider and, topped with his ability to go to any universe, allows the Spirit of Vengeance to be anywhere he is needed in a near instant. And it does makes sense in a way. A car is obviously faster than a human. So, in turn, a demon powered car should be faster than a speedster.

Ghost Rider has had a very interesting uptake recently in the comics. The Spirit of Vengeance has been shown to be one of the most powerful entities throughout all of time in the Marvel 616 and adding this extra knowledge of his speed only enhances the current version further. It will be fun to see how Marvel builds on this knowledge and uses this power in the future. Considering that Deathlok dropped this little nugget of information here, expect to see this speed to be used at least once during this run.

What do you think of Ghost Rider being the fastest character in Marvel? Let us know in the comments below!