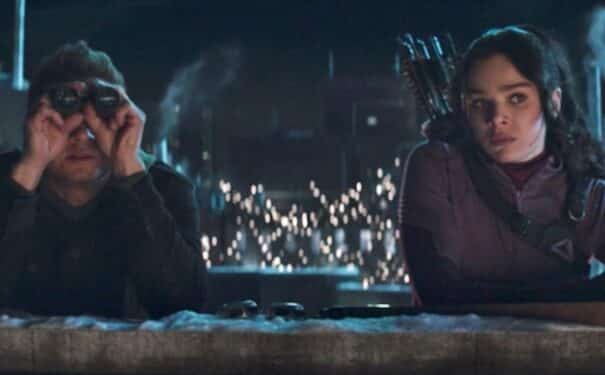 The Marvel Cinematic Universe has been expanded in some rather interesting ways with the addition of Disney Plus. The streaming platform has allowed both Disney and Marvel to further explore their brand of superheroes in ways not previously granted by theatrical films. Most recently, it’s allowed fans to spend more time with Jeremy Renner’s Hawkeye than ever before. The new Disney Plus series Hawkeye has paired the character with Hailee Steinfield’s Kate Bishop and put them on their very own adventure. Now the latest episode of Hawkeye has revealed a big MCU cameo which ties the series with one of the more recent theatrical movies.

As those who’ve been watching the series know, there’s been a covert operative moving in on Clint Barton. The latest episode of the series ended with the operative finally being unmasked, and it was a rather exciting reveal. As it turns out, the operative in Hawkeye was none other than Yelena Belova – who fans will recognize as Natasha Romanoff’s sister from Black Widow. The character has essentially become the new Black Widow, and after the events of that titular film, she began tracking down Clint Barton for believing him responsible for Natasha’s death.

It’s a pretty stunning scene, and proves just how interwoven both the films and shows have become. As you can imagine, social media has gone crazy with the reveal. Here are some of the reactions down below:

Kate and Yelena are going to be such a chaotic duo and I can’t wait for it #Hawkeye pic.twitter.com/t94Kxr4lwO

kate and yelena have the same chaotic energy #hawkeye pic.twitter.com/0XDTfLwpkw

//#Hawkeye spoilers
.
.
.
.
.
YELENA WEARING A BRAID JUST LIKE NAT I CAN'T DO THIS pic.twitter.com/FjcbKOWfr6

#hawkeye spoilers
–
–
–
can we please mention the fact that yelena did natasha’s pose😭 pic.twitter.com/RX0pwMlcRf

#hawkeye spoilers
–
YELENA IS BACK pic.twitter.com/ZUXCmxVsoE

With two episodes left of the series, it’ll be interesting to see where Hawkeye goes from here. Many suspect that there will be some other major character reveals in the near future, so Yelena Belova might not be the only big MCU cameo in Hawkeye. As such, fans can stay tuned to ScreenGeek for updates on those fronts as we have them.

Fans can expect new episodes of Hawkeye to be added weekly every Wednesday.