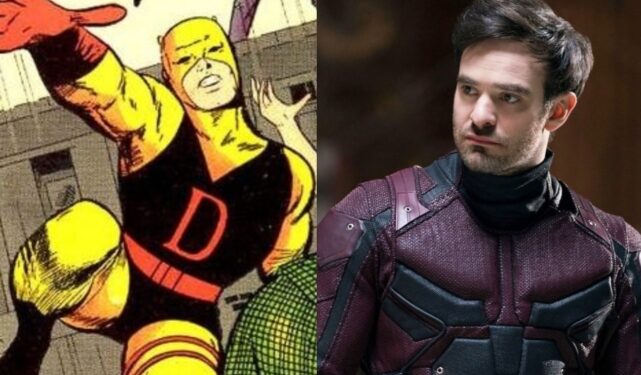 Fans were devastated when the Netflix series Daredevil was canceled. It seemed that everyone universally loved Charlie Cox as Daredevil, and many assumed that he would never return to the role. Kevin Feige, however, recently stated that Charlie Cox would never be replaced – and that it was only a matter of time before he returned. Now fans have been speculating when the time could be, and according to a new rumor, it seems there’s a chance Charlie Cox could show up as Daredevil on She-Hulk.

This rumor comes via GWW’s KC Walsh on the Change My Mind Podcast. According to him, Daredevil will not just appear on She-Hulk – but that he’ll be wearing his classic yellow costume. This goes back to the original Daredevil comics, where the character initially chose a yellow costume to honor his father’s boxing robe. It wasn’t until later that he changed to the red color.

With the way Kevin Feige insisted Charlie Cox would come back as Daredevil, it became clear that he could return at any point. With so many films and TV shows in development, the character really could pop up anywhere. So while this rumor should be taken with a grain of salt, it definitely isn’t out of the realm of possibility.

As for the yellow costume, that definitely makes sense as well. Marvel has been making sure to give their characters comic book accurate costumes, so it would be a great way to continue that tradition with Charlie Cox’s Daredevil. It would also be a nice change of pace from the Netflix series, by making the character start off with his yellow costume. Then he could presumably switch to red at some later point in the MCU. As always, fans will just have to wait and see what happens.

She-Hulk doesn’t have a release date yet, but it’s expected to hit Disney Plus at some point next year.