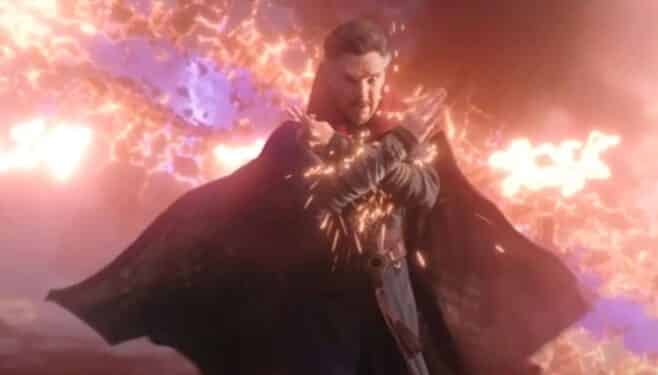 With Spider-Man: No Way Home finally having reached the big screen (in some territories) today, it was almost inevitable that there would be leaks. The first leak to hit the web today was in fact the first trailer from Doctor Strange in the Multiverse of Madness AKA Doctor Strange 2 which, as was reported earlier this week, was revealed as a post-credits scene of the wall-crawlers latest entry – and it has now leaked online.

The trailer begins with Benedict Cumberbatch’s Stephen Strange echoing his words from the Spider-Man: No Way Home trailer where he explains how the ‘Multiverse is a concept about which we know frighteningly little’ with him wandering through what looks like a twisted version of New York City. We hear what sounds like Chiwetel Ejiofor’s Mordo telling him how his ‘desecration of reality will not go unpunished’ with Strange responding how it was the only way.

We get a flew quick glimpses at who will be the main players in the sequel including Benedict Wong’s stalwart companion Wong, Rachel Macadams’ Christine Palmer on her Wedding Day, and newcomer Xochitl Gomez’s America Chavez.

We then move the action to the other big name in the film, Elizabeth Olsen’s Wanda Maximoff, now seemingly living an idyllic life, waiting for the day that Strange comes to see her after her attempts at playing house went terribly wrong in WandaVision earlier this year. Much to her surprise, however, he asks for her help with the Multiverse.

From there we see a montage of shots including Mordo’s new look, Wanda rocking her new Scarlet Witch look whilst casting a spell, Kamar-Taj seemingly being attacked, and Strange and America Chavez having a fight with a multiversal being on the streets of New York, and last but not least, the reveal of the main villain – Doctor Strange.

However – this isn’t the Doctor Strange that we have come to know and love over the past few years, this looks to be the Doctor Strange Supreme that we last saw in Marvel’s What If…? earlier this year. This definitely opens up the possibility for Doctor Strange in the Multiverse of Madness to be one of the craziest entries in the MCU, especially given what we have already seen in the aforementioned animated series.

Hopefully, we see an official version of the trailer in the coming weeks, possibly after Spider-Man: No Way Home has had a decent run in theatres and people aren’t so wary about spoilers. In the meantime, you can check out the leaked version below.

Doctor Strange in the Multiverse of Madness AKA Doctor Strange 2 is set to hit theatres on the 6th May 2022. In the meantime, you can catch the Strange in Spider-Man: No Way Home in theatres now, and Scarlet Witch and Doctor Strange Supreme in WandaVision and What If…? on Disney Plus now.