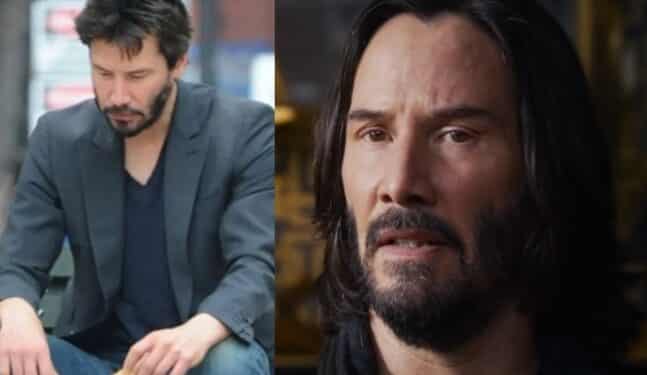 Actor Keanu Reeves has played so many fantastic characters over the decades, you’d think there’d already be enough material there to mine for memes. But as it turns out, a series of real life photographs taken of actor Keanu Reeves were much better meme material. Over a decade ago, in 2010, photos of the actor were taken while he sat alone on a park bench. They’ve become quite iconic ever since – showing Keanu Reeves in deep thought as he merely sits alone and holds a sandwich. With the name Sad Keanu having become the appropriate title for memes based on the photos, it’s exciting that Keanu Reeves has now officially responded to them.

He gave his response on The Late Show with Stephen Colbert, acknowledging that he was more than aware of the Sad Keanu memes. Hilariously, he gives a rather funny and understandable response. As it turns out, he was mostly just concerned with his sandwich.

Here’s what the beloved actor said:

“I’m just eating a sandwich, man! Listen, I was thinking. I had some stuff going on, I was hungry.”

The meme was brought up by Stephen Colbert when they were discussing BRZRKR, a comic book series created and co-written by Keanu Reeves. As it turns out, a panel from the comic seems to be very reminiscent of the Sad Keanu meme. While Keanu Reeves is unsure if it was intentional or not, he suggests that it could’ve been. As noted by Reeves, he believes artist Ron Garney possibly did it to be “kinda meta.”

In any case, it goes to show how great of a presence Keanu Reeves has both on and off screen. It’s not enough that he’s made so many great movies over the years, but even a photo of the actor holding a sandwich is enough to go viral.