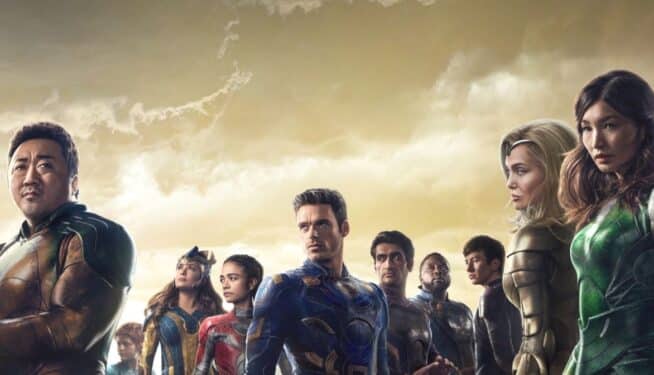 Eternals has finally hit Disney Plus, and fans who weren’t able to see the Chloé Zhao film in theaters last year are now finally able to give it a look. The film introduces several new heroes and characters, while also giving fans a ton to look forward to thanks to a few exciting post-credit scenes. Of course, now that Eternals is available to stream, some have been able to notice more little Easter eggs left behind by the filmmakers.

Several interesting cameos were spotted upon first viewing, such as referencing the DC Universe’s Batman and Superman, and Captain America’s classic shield making a brief appearance in the background, but it turns out that there was also a subtle Star Wars reference that not too many fans caught.

During the scene in which Ikaris and Sersi are speaking on Kingo’s jet, Star Wars: The Empire Strikes Back can be seen playing on the monitor in the background near the bar. Disney has made a habit of throwing in Star Wars references throughout the MCU from time to time, but this is the first time it has actually been referenced featuring footage.

Guys I found something! The Empire Strikes Back is playing in the background of Eternals. from marvelstudios

Most of the MCU’s Star Wars references came from Tom Holland’s Spider-Man. In Captain America: Civil War, Parker mentions The Empire Strikes Back by name. In Spider-Man: Homecoming, Parker and Ned discuss building a Lego Death Star that ultimately shatters into pieces when Ned discovers Peter’s secret identity. There are plenty more Star Wars references throughout Spider-Man’s appearances, including one just before the ending of Spider-Man: No Way Home.

This certainly doesn’t come as a huge surprise given Disney now owns Star Wars, so it would make sense that Marvel would take the opportunity to pay homage to George Lucas’ legendary franchise.

Eternals and the entire Star Wars franchise are now available to stream on Disney Plus.