James Wan Says Bonnie Aarons Will Return For ‘The Nun 2’ 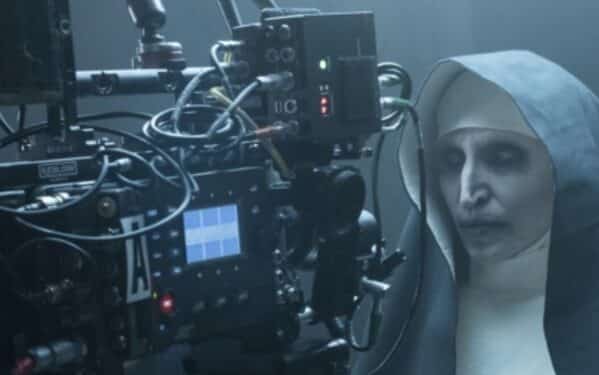 After the release of The Conjuring: The Devil Made Me Do It, it was unclear which film would be next to come out of the Conjuring franchise. Then, at the 2022 CinemaCon event, it was revealed that The Nun 2 was officially moving into production. Fans were ecstatic to know that The Nun would be getting its previously-announced sequel. Now producer James Wan, who also directed The Conjuring and its sequel The Conjuring 2, has confirmed that Bonnie Aarons will return to portray the titular nun known as Valak.

James Wan used his Instagram account to reveal the good news. While he didn’t reveal much about the film, he did confirm its director, that Bonnie Aarons would return, and that it was moving into production.

Here’s what he wrote:

“NUN 2 — moving into production.
With @michaelchaves directing. Welcome back Michael and @bonnieaarons1 to #TheConjuringUniverse.
Here are some pics of Bonnie haunting me on The Conjuring 2 set.”

He also managed to share some behind the scenes photos from The Conjuring 2. They show James Wan next to Bonnie Aarons in complete Valak makeup. It’s clear that the two have been enjoying their time making these movies, so having this tradition continue with The Nun 2 will be exciting to see.

While Bonnie Aarons will be playing Valak in The Nun 2, it’s been revealed that Michael Chaves will direct. Michael Chaves previously took over for James Wan when he directed The Conjuring: The Devil Made Me Do It, the third film in the main Conjuring storyline. Now that the film is entering the production stage, it hopefully won’t be much longer before more news about the film is revealed. As such, fans can stay tuned to ScreenGeek for updates on this highly-anticipated sequel as we have them.

The Nun 2 currently does not have a release date. But if production starts soon, it could be released at some point in 2023.