Marvel Has Retconned The Origin Of Every Superhero On Earth

It isn’t unusual for a comic book to launch a new continuity or retcon previous information. But Marvel has just made one of its biggest retcons ever. It’s just been revealed that Marvel has actually retconned the origin of every superhero on Earth – which includes sixty years’ worth of lore and canon.

This retcon occurred in the release of Eternals #12, as noted via ScreenRant, which furthered a plotline from Jason Aaron’s Avengers run. Specifically, the retcon ties directly with the dead Celestial named Progenitor that fans will recognize from the aforementioned Avengers comics. As they explained:

“Readers of Avengers should be familiar with their home base, the dead Celestial called Progenitor, who, billions of years ago, crash-landed on Earth, dying from an infection caused by space parasites. The infected fluids of the dying god poured into the fertile primordial Earth and changed the planet forever, making it a breeding ground for superpowered individuals who would act as the “defense system” of the planet.”

They further explained how this was elaborated in Eternals #12 by Kieron Gillen, Esad Ribic, and Matthew Wilson.

“The Progenitor’s bodily fluids were too noxious to produce stable “strange” life forms. So, the Celestials created the Deviants to act as “stabilizers” for the fluids. They then pass on the stable mutagenic substances to Earth-native biological beings, creating stable “strange” (meaning superpowered) life forms. This process climaxed in the past few centuries, making the Deviants “the mothers of the Age of Marvels“.”

You can see this comic book retcon further explained in the below chart: 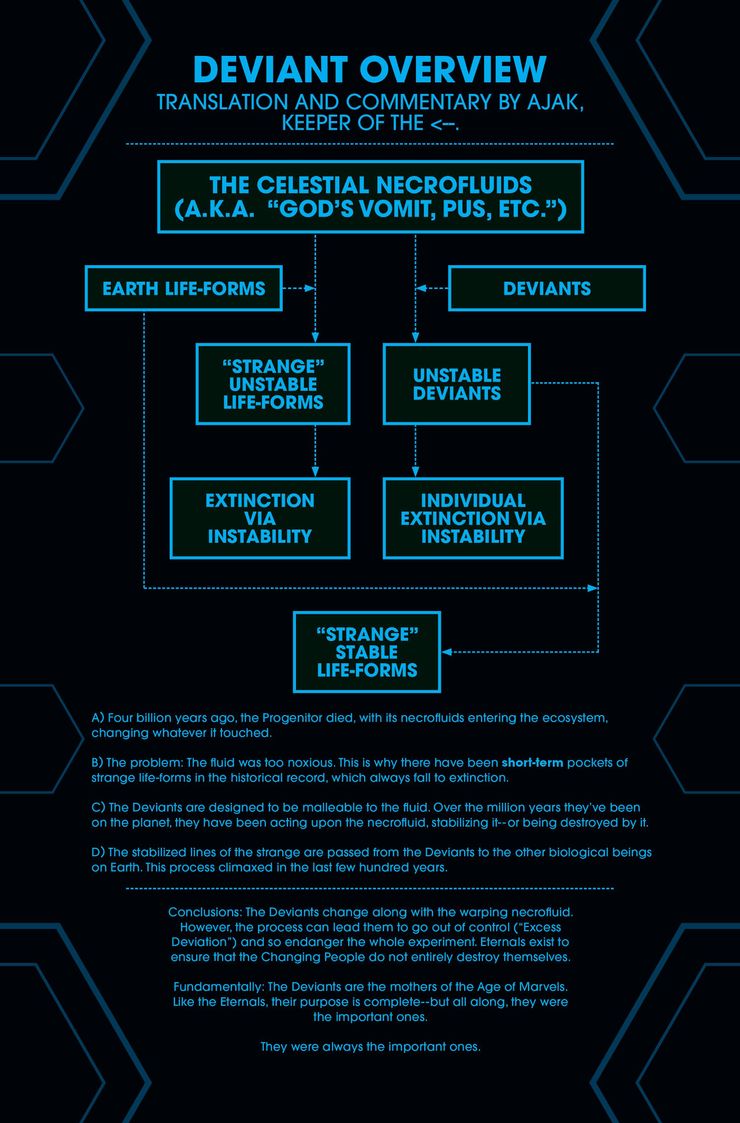 This means that the Celestials’ decision to manipulate the process beginning with Progenitor is the reason all Marvel superheroes exist. While the unique origin of each Marvel superhero was previously considered random, this now means they were all a result of the Celestials’ actions. Fans will see this retcon further explored in the upcoming Judgement Day event where Progenitor will actually awaken. At this point, he’ll judge all of Marvel’s superheroes which are considered his “descendants.”

While retcons are often divisive for fans, one this huge will no doubt be extremely divisive. As such, it’ll be interesting to see how fans react going forward and what will happen with this new Judgement Day arc.