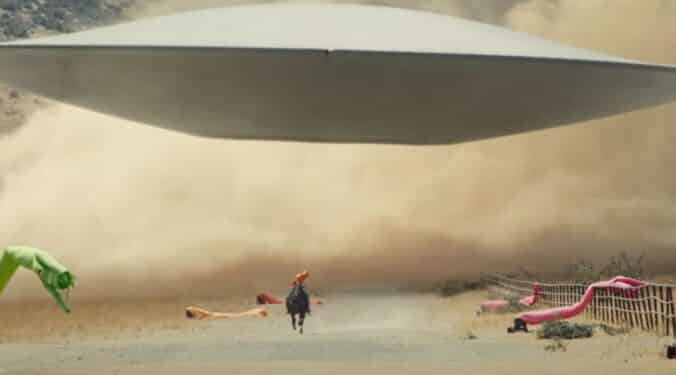 Fans of Jordan Peele’s films Get Out and Us are in for an exciting treat. The final trailer for his next upcoming horror film, titled Nope, has just been released. Although the trailer features a surprising amount of new footage, there are little to no spoilers involved. In fact, the biggest marketing push for the film is that “it’s not what you think.” As such, it’s worth suggesting that this newest trailer for the film is something like a brain teaser for fans to try and figure out ahead of the upcoming film.

It’s been highly speculated that the movie will have something to do with aliens. Especially when you consider the flying saucer shape that seems to come down from the sky. But if “it’s not what you think,” then one must wonder if that’s really a flying saucer at all. We’ll likely only know for sure once the film is released in theaters. Until then, this new final trailer should certainly hold over any anxious fans.

Here’s the final trailer for Nope along with a slightly different international trailer down below:

The footage certainly promises one crazy movie. Fans can stay tuned to ScreenGeek for any additional updates as we have them. Luckily, fans only have to wait until next month before they’ll be able to see the film and find out what Nope is really about.

As for the setup of the highly secretive film…

“Residents in a lonely gulch of inland California who bear witness to an uncanny and chilling discovery.”

Jordan Peele directed the film, following his previous works Get Out and Us. He also wrote the film which was produced by Ian Cooper and Peele for Monkeypaw Productions.

Fans will be able to see Nope when the film is released in theaters on July 22, 2022.