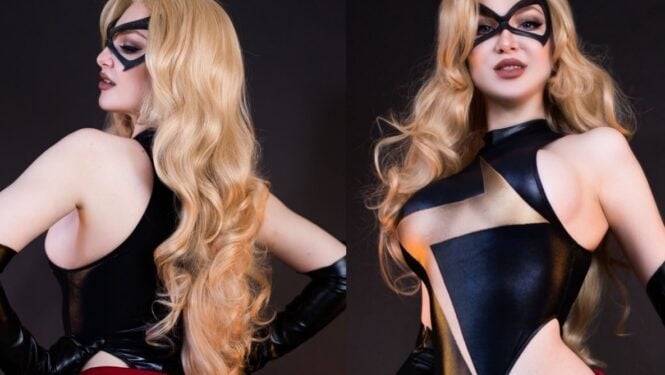 With the release of the Disney Plus series Ms. Marvel, it’s the perfect time to think about the original Ms. Marvel – none other than Carol Danvers. Indeed, before she became Captain Marvel, she was originally known only as Ms. Marvel. She had a very different costume as well. Now, as you can see below, Ashlynne Dae has decided to show off her own take on the classic costume with her very stunning cosplay.

As noted in an interview, Carol Danvers is one of her “favorite female Marvel characters.” As such, tackling a cosplay like the original Ms. Marvel meant a lot to her. She explained why she cares about the character so much and why she chose this variation of the Ms. Marvel costume to cosplay.

Check out the cosplay below:

She further discussed her feelings about Carol Danvers’ unique costume with Superhero Hype:

“Carol Danvers has long been one of my favorite female Marvel characters. She’s had her fair share of struggles, from losing her powers and most of her memories, to an inter-dimensional assault, and even alcoholism. But she always managed to find the hero inside, even in her darkest moments. And I’ve always admired how she has fought for gender equality.”

“Carol’s black outfit was always my favorite of her many looks, and it was the first outfit I saw her wearing while reading one of her comics. I always loved the jokes made at that costume’s expense, both by Carol herself and by the other characters around her. This is truly a super cool costume to look at, but it is not a very practical outfit to be a superhero in! Regardless, I will always think of Carol in this costume, and I’ll always remember her from that era.”

With that in mind, however, she is excited to see how the character has evolved. She also supports Kamala Khan who happens to be the latest character to take on the Ms. Marvel mantle.

“That said, I am glad that she has moved on to become Captain Marvel, while Kamala Khan has made the Ms. Marvel identity her own.”

She also shared some of her hopes for the future:

“Someday, I would love to tackle Carol’s other outfits, and I’ve always wanted to give her faux hawk Captain Marvel jumpsuit a go. But for now, I’m so glad to have finally made my favorite Carol Danvers/Ms. Marvel outfit!”

Marvel Studios obviously decided to go a much different direction with the character and with Carol Danvers/Captain Marvel.