Jupiter Eats Other Planets According To New Report 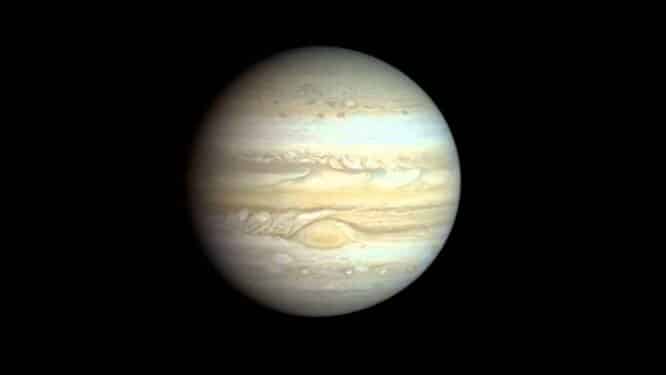 It’s very often that real-life science can be just as shocking or interesting as a work of fiction. Now a new report about Jupiter suggests that the planet isn’t that far off from something like the Marvel villain Galactus. In particular, it’s being reported that Jupiter actually eats other planets.

This report from NASA via Astronomy & Astrophysics suggests as much. While it isn’t the easiest read for those that aren’t accustomed to the jargon involved, here’s a brief breakdown. At the moment, this is only a theory, but it’s long been suggested that Jupiter was made up of other planets. Now, however, the Juno space probe has received a good enough look at the planet’s core thanks to some temporarily parted gases that the theory makes a lot more sense.

“Our results imply that Jupiter continued to accrete heavy elements in large amounts while its hydrogen-helium envelope was growing, contrary to predictions based on the pebble-isolation mass in its simplest incarnation (Lambrechts et al. 2014), favouring instead planetesimal-based or more complex hybrid models (Alibert et al. 2018; Guilera et al. 2020). Furthermore, the envelope did not mix completely during the planet’s subsequent evolution, not even when Jupiter was young and hot (Vazan et al. 2018).

Furthermore, they explained that they will require further exploration:

Our result clearly shows the need for further exploration of non-adiabatic interior models for the giant planets, and it provides a base example for exoplanets: a non-homogeneous envelope implies that the metallicity observed is a lower limit to the planet bulk metallicity. Therefore, metallicities inferred from remote atmospheric observations in exoplanets might not represent the bulk metallicity of the planet.”

It’s certainly an interesting concept and one that proves how much real-life can sometimes mirror what we’ve written in fiction, and vice versa. While it isn’t exactly an entity like Galactus, however, Jupiter is still a fascinating object and one potentially made up of many other planets.