‘Thor: Love And Thunder’ Cameo That You Probably Missed 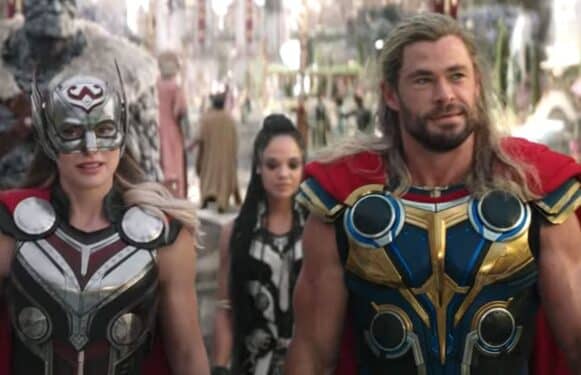 Although the Marvel Cinematic Universe is largely comprised of both feature films and television shows, there are also plenty of short films. The shorts actually help fill in plenty of gaps between the bigger projects. For example, there was a short from Thor: Ragnarok and Thor: Love and Thunder director Taika Waititi titled Team Thor. This short introduced a character named Darryl Jacobs, who was revealed as Thor’s roommate, and he was played by actor Daley Pearson. Now it appears that Daley Pearson actually made a cameo in Thor: Love and Thunder.

The cameo is incredibly quick, so it might’ve been easy for fans to miss it while watching Thor: Love and Thunder – but it is there. The scene occurs when Jane Foster alongside several tourists take a moment to gather around Mjolnir.

The broken pieces of the hammer are one display in New Asgard and, when you see the tour guide of the group, it’s actually Daley Pearson who has now become Darryl the Tour Guide.

Daley Pearson even showed a closer look at his character in the below post which he captioned a “#glowup” for his role:

The character has become something of a fan-favorite over the years. In fact, he was even featured in his very own spin-off short film titled Team Darryl. This means his participation in Thor: Love and Thunder just makes the film that much more fun for fans of the Marvel Cinematic Universe. We’ll be sure to keep you updated on other Easter eggs or cameos that might’ve went under fans’ radars.

Fans can currently see Thor: Love and Thunder in theaters.