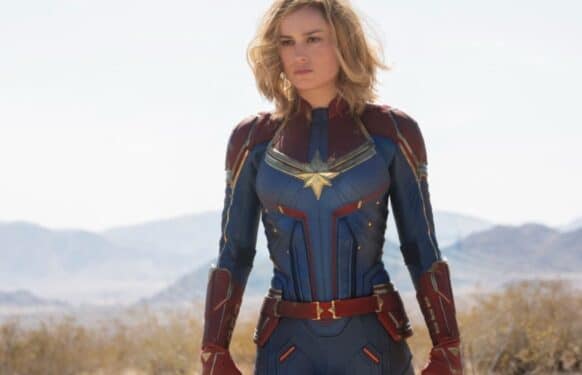 Spoilers ahead for Ms. Marvel. Marvel Studios recently concluded its latest Disney Plus series set within the Marvel Cinematic Universe. The series Ms. Marvel focused on Kamala Khan, aka the titular character, who was played by Iman Vellani. She’s intended to have quite the role in the MCU going forward – and that includes the upcoming film The Marvels. This particular film will act as a continuation to both the movie Captain Marvel and the aforementioned Ms. Marvel series. With Brie Larson’s Captain Marvel, Iman Vellani’s Ms. Marvel, and Teyonah Parris’ Monica Rambeau it’s no doubt exciting to see the three together. And, just for the occasion, it looks like Brie Larson will have a new Captain Marvel costume as well.

Fans recently got a glimpse at Brie Larson and her new Captain Marvel costume during the finale of Ms. Marvel. It was a shocking moment for fans who were keeping up with each episode of the Disney Plus series. After all, we all knew that it would eventually lead into the events for The Marvels. But seeing Brie Larson make a surprise appearance had everyone even more excited for what was to come.

Especially considering that the scene occurred not long after Kamala Khan was suggested to be the Marvel Cinematic Universe’s first mutant.

As such, here are some photos of the new Captain Marvel costume:

Say what you will about Captain Marvel and her costume designs, but this new one is probably her best yet, despite feeling like it’s missing a few details. It just feels way more comic accurate. pic.twitter.com/VsCtUtRD2F

Of course, it’s possible that there will still be additional changes once The Marvels hits theaters. After all, the costume has already had several alterations between its appearances in the original Captain Marvel film, Avengers: Endgame, and Shang-Chi and the Legend of the Ten Rings. But this will certainly be a great way to hold fans over until the film is released next year.

Fans will be able to see The Marvels when it hits theaters on July 28, 2023. Meanwhile, fans can also catch up with Ms. Marvel now that all episodes of the Marvel Cinematic Universe series are available to stream on Disney Plus.