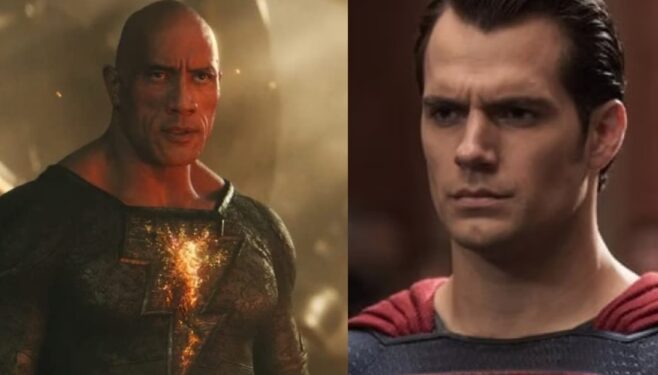 Fans were hoping that the rumors would be true regarding Henry Cavill and his potential appearance at Comic-Con 2022. Unfortunately, the actor did not appear at the event, and many fans were disappointed. After all, it seems to suggest that Henry Cavill really is done with playing Superman. Now, thanks to actor Dwayne Johnson, he seems to have further hinted that Henry Cavill won’t be returning as the Man of Steel.

One fan asked him if he thought his character Black Adam would win in a fight with Superman. The answer was not one fans were hoping for.

Here’s what Dwayne Johnson specifically had to say regarding Superman and the hint that Henry Cavill might not return – with a video below it:

“That’s a great question… don’t threaten me with a good time, cause I’m going to answer that question. Well, I will say, as you guys know, because we’re all in deep with this mythology, and it’s been an age-old question of who would win a fight between Black Adam and Superman. Pound for pound, they’re pretty close. I guess it probably all depends on who is playing Superman; I’m just going to say that. I’ll leave it at that.”

Only a vocal minority dont want Cavill/Snyder duo back
The people have booed… i mean… spoken#HenryCavillSuperman#RestoreTheSnyderVerse pic.twitter.com/1OzeAzCSi2

“I will say this. I will say that Henry is a buddy and he is a phenomenal Superman. He is a phenomenal Superman and Henry Cavill is the Superman of our generation with respect to the other Supermans of the past. Every time I see him, we have some tequila and I say ‘This guy is Superman.’ My longtime business partner Dany Garcia has been a passionate advocate for Henry Cavill and his career for a very, very, very long time.”

The audience immediately responded with loud boos. Obviously they care a lot about Henry Cavill and getting him back as Superman. But, based on the current situation, it’s looking less and less likely. Of course, nothing is set in stone, and it’s very much possible that he could return to the role at a later date. Especially if he and Warner Bros are attempting to keep any such plans secret. With that in mind, we’ll just have to wait and see what happens.