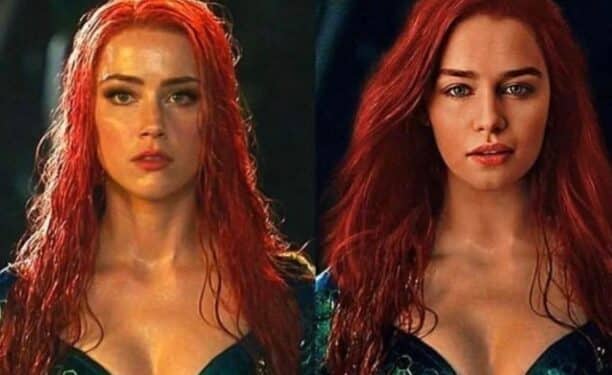 The various controversies and legal issues surrounding actress Amber Heard seem to extend to her role as Mera in the upcoming film Aquaman and the Lost Kingdom. Although she’s so far confirmed to still be appearing in the film, there are millions of fans who’ve signed a petition to have her removed from the project. This was in direct response to the famous trial between herself and Johnny Depp which Amber Heard lost. Because Johnny Depp previously lost work because of Amber Heard’s allegations against him – many fans feel that it’s fair she receive the same treatment. And, while she’s still attached to the film as stated above, new rumors suggest otherwise.

Specifically, there are claims that Amber Heard will actually be replaced by Emilia Clarke.

Many fans have previously suggested that Emilia Clarke should replace Amber Heard as Mera. As such, the following should be taken with a grain of salt. But it appears that some users have noticed Emilia Clarke will appear on Google when looking at the cast for Aquaman 2.

With that said, it doesn’t say which character she would be playing (if any), so it could be a bit of false information. Nevertheless, many social media users believe that this means Emilia Clarke is going to replace Amber Heard in the recently-delayed project.

As you can see in some of the responses below:

I see the internet is abuzz today with the addition of Emilia Clarke to the Aquaman 2 cast! 😎#AmberHeardIsFinished #AmberHeardIsAMonster #JohnnyDeppKeepsWinning#JohnnyDepp pic.twitter.com/hSk2osIRwB

A Google search reveals the image below.

Interesting that Emilia Clarke (who is an utterly adorable person) is not on the IMDB cast list. I think Jason Momoa would have been delighted to re-shoot the Mera scenes with Emilia instead of #turd pic.twitter.com/GGJzjrPbPK

Furthermore, there are users who simply believe Emilia Clarke should play Mera regardless:

Tell you what WB. Release Aquaman with AH and release a version with Emilia Clarke as Mera, let’s see which one does better.
I’d put money on the later doing the best!! And by best I mean absolutely blowing the AH version out the water (accidental pun!! 😂)

This is very interesting

She’s gooone
If you google ‘Aquaman 2 cast’, Emilia Clarke now appears as part of the main characters. Could it be that @wbpictures is preparing to make amends? A big apology to JD is long overdue. pic.twitter.com/ApuRonMBFs

May have been debunked. #Google search does not show the same thing at this time.

With so much time still until Aquaman 2 is actually released, it remains to be seen what changes if any will happen. As for now, it looks like Amber Heard will still remain as part of the film’s cast. But as we’ve seen with recent projects like Batgirl – Warner Bros is no longer afraid to make drastic changes at the last minute. So stay tuned to ScreenGeek for additional updates as we have them.

Audiences can currently expect Aquaman and the Lost Kingdom to be released late next year on December 25, 2023.