‘Werewolf by Night’ Review: MCU’s First Horror Is A Success 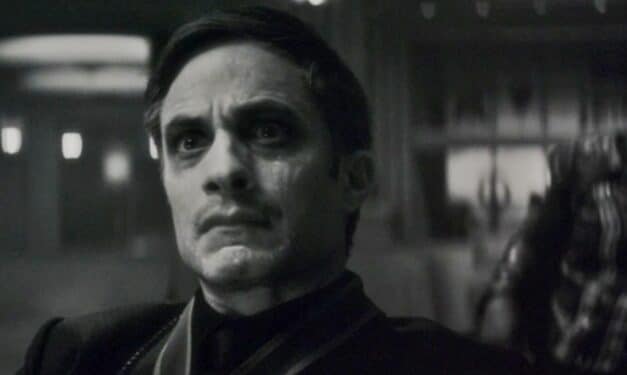 Marvel Studios is moving full steam ahead with their Disney Plus programming. Fans of the global powerhouse have been inundated with all their shows that continue to expand on the Marvel Cinematic Universe. This October will see the release of a Special Presentation known as Werewolf By Night – and it clearly shows Marvel Studios swinging for the fences. Fortunately for MCU fans, Werewolf by Night gets knocked out of the park.

Werewolf by Night, the latest venture from Marvel Studios, is based on the Marvel Comics by the same name. The program is directed by first-time director and LONG TIME composer Michael Giacchino. In lead roles, it features Gael García Bernal (Jack Russell) and Laura Donnelly (Elsa Bloodstone). The two find themselves in the mystery surrounding The Bloodstone. A powerful weapon used to fight off evil, but the two must battle several hunters and death dealers for control of it. I purposely gave the bare minimum of the premise to keep the mystery of the program intact.

From the jump, Werewolf by Night differs from anything Marvel Studios has done in the past. I can compare this show to a PG-13 version of 1998’s Blade. If that turns you away, hold on—this is a good thing. The program teeters on the edge of R-rated violence and action and does it entertainingly. Giacchino’s direction was damn good, as the guy knew exactly what he was doing with the feel and take on the comic.

Werewolf by Night’s aesthetic look was a great homage to the classic creature horror flicks of the 50s & 60s. The black and white style of the special presentation harkened back to that classic overdramatized but fun werewolf monster. I couldn’t get enough of what I saw on screen with the eye-gasming set designs and action-filled set pieces played on in the second and third acts. Giacchino’s style of directing brought the program to life without using bombastic cheap camera tricks but by letting the camera absorb the atmosphere of Werewolf by Night’s world.

The writer meshes well with the direction as it kept me captivated by what would happen next with these characters. Heather Quinn and Peter Cameron took a step toward altering the special presentation from the comic, but not too great to keep from that MCU feel. I swear Werewolf by Night could’ve done well as a feature-length movie and released in the theater if Marvel Studios had just pulled the trigger.

The acting is superb as well. Many of the characters were spot on in their roles and took every scene to keep the story moving steadily. Bernal and Donnelly’s chemistry was a good mix whenever they shared the screen, and the two worked well on their own to boot. Look, Bernal can be charming as f*** in anything he does, and the man keeps that going in a matter that doesn’t go too far out of line with the special presentation needed.

There are two gripes I have with the program. One is that some of the CGI can come off a little bit worse. It’s not much of a distraction – but noticeable with a particular character making an appearance. The practical effects for another character make up for it, though. The creature design on the practical effects side is nothing new – but works well within the context of the Werewolf by Night. Another gripe is the length.

I really think this program would’ve been great as a 90-minute or at least a complete hour-long program. But then, I guess you can say that I’m being greedy with what Werewolf by Night was offering, and I just wanted more of this world. So I’m hoping that we’ll catch come of the character again in another special presentation or possibly in the long-rumored Midnight Suns series or movie.

Marvel Studios swung hard for Werewolf by Night and connected with great results that left me entertained and wanting more. I hope the studio keeps this going with their future programs to support their ideas fresh. The MCU must go headfirst into different genres to keep the audience wanting more from them, and Werewolf by Night is a step in the right direction. Marvel Studios still has a tight handle on the pop culture zeitgeist, and here’s hoping they keep that grip firm for all our sakes.