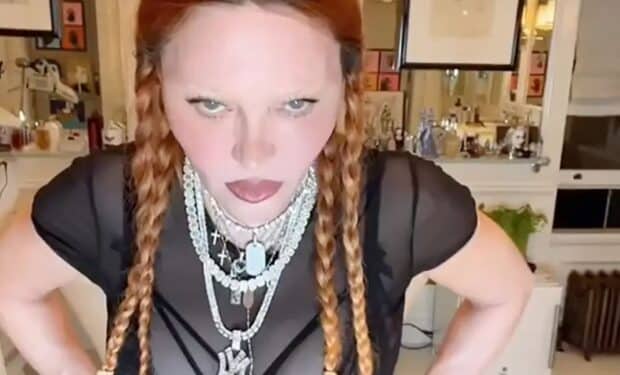 It appears that 64-year-old star Madonna has shocked her fans with a disturbing new TikTok video from the hit social media app. The video clip, which was shared to her Instagram account, features a moment where Madonna mouths along to Baby Keem’s song “Vent.”

The specific lyrics she chose to mouth include the phrase, “Have you ever been punched in your motherf-king face?” And, furthermore, “What you say? Oh, you haven’t? Alright, wait.” The footage ends soon after.

But, with Madonna’s darker appearance in the video, it’s certainly a far cry from how many fans used to recognize the beloved Queen of Pop.

Now fans are responding and calling the video a “disturbing” change from the Madonna they used to know.

Here’s the TikTok video posted by Madonna to her Instagram page:

Meanwhile, here’s what some users have stated in the comments on the video:

“This is just awful! What happened to the real Madonna, the one that you can actually look at and say wow you are beautiful and talented !!! LMAO 🤣.”

“The Madonna I used to admire was the one on The Immaculate Collection……this woman has lost all of her mind. Time to retire….”

“You where my idol growing up. I used to love your music & creativity, 👏please stop with these weird reels! it’s getting dark & concerning now.”

Another fan even compared her to Marilyn Manson:

“What happened to you?” they commented. “You look like Marilyn Manson or something! Don’t shave the eyebrows!”

One thing is for certain – this definitely is a new path for Madonna compared to the earlier stages of her career. Of course, with changing times come changing appearances and styles, so it makes sense that Madonna would experiment and try something a little different for the modern internet. Although, with that in mind, it doesn’t look like a lot of her followers are enjoying the new style. As Madonna continues to become more active on social media, something she started only a few years ago, we’ll likely see more interesting looks and stunning updates from the pop culture star.

Stay tuned to ScreenGeek for any additional updates regarding Madonna as we have them. As for now, it looks like her social media profiles have plenty of interesting updates for fans of the “Like a Prayer” singer.