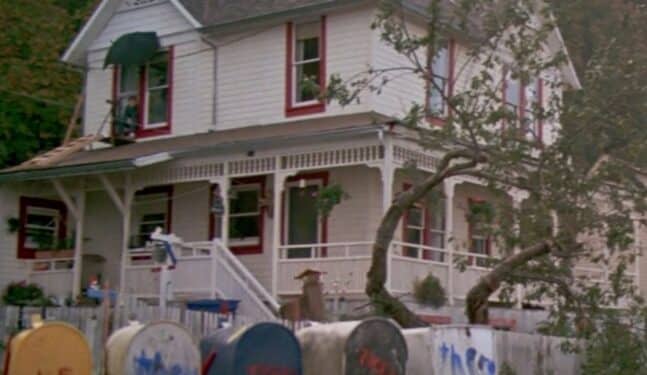 The comedy adventure film The Goonies is without a doubt one of the most beloved films of the 1980s. As such, it would be the ultimate achievement for any fan to acquire the iconic house used in The Goonies. Now, for the cost of only $1.65 million, you can.

Fans will remember the house for being located in the “Goondocks,” the fictional neighborhood of Astoria seen in the film. It’s there that the two brothers Mikey and Brandon, (played by Sean Astin and Josh Brolin, respectively), have a wealthy developer eager to purchase their house against their wishes. With a struck of luck, however, they locate an old treasure map in their attic. This allows them to save their house with the help of their friends (played by Corey Feldman, Martha Plimpton, Ke Huy Quan, Jeff Cohen, and Kerri Green). Now, as revealed in the listing held by Jordan Miller of John L. Scott Real Estate, the iconic house is for sale nearly four decades after The Goonies was first released.

The house is described as 3 bedrooms with 2 bathrooms and 2,336 square footage. It was built in 1896, and as you can see from some photos shared below, it seems to have been completely renovated. While fans will no doubt recognize the architecture of the house from the film, it’s been cleaned up and fully modernized in the decades since.

Furthermore, if you expect the attic space to resemble the one from the film, you might be disappointed. Although the attic in the film was actually a set from a soundstage, the house’s attic has been renovated nonetheless. It’s now a very cozy and clean bedroom with a gorgeous light fixture.

It looks like they renovated the attic, but we could de-renovate and place a treasure map in it pretty easily pic.twitter.com/LCLd3obrxX

There are no doubt endless fans who would love the chance to own this particular property. As for whoever owns it next, let’s hope they continue to take good care of the house as its previous owners have. After all, it’s a piece of film history.