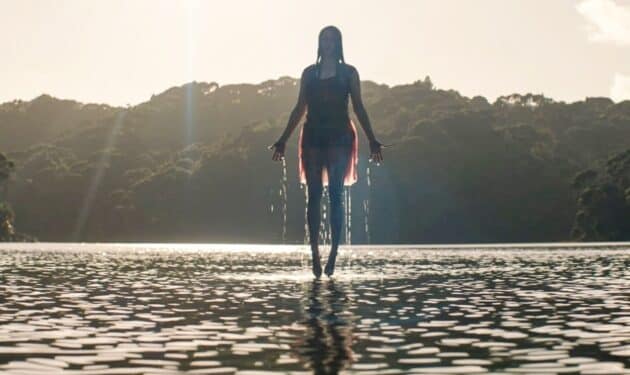 Through thick and thin, you can’t keep the Evil Dead franchise down. It has been part of the pop culture zeitgeist for decades, with little moments of slowing down. As a result, fans of the franchise—like this writer here—have been eating up whatever Sam Rami delivers with his creation. Consequently, we have many games, comics, a remake, and a badass show to wet our whistle. Fortunately, we’re getting more from writer/director Lee Cronin with Evil Dead Rise.

The director has been busy contributing to the Evil Dead franchise with his film that is set in Los Angeles. We know very little about Evil Dead Rise – but some have speculated that the wilderness and small town setting the series has been known for will be traded for the concrete jungle of L.A. That is not so much the case as new pictures of Cronin’s Evil Dead Rise reveal that it will at least partly take place out in the woods.

One image showcases Cronin behind the scenes giving directions on what he is looking for in a particular scene. The other image sticks out the most as we get another look at a small but effective piece of the movie. The woman floating above a lake is a haunting display of what’s coming from the film.

A new look at ‘EVIL DEAD RISE’ has been released. pic.twitter.com/WgsAWHJWtP

New Behind the scenes look of “EVIL DEAD RISE” 🩸

Cronin says that Evil Dead Rise is “firmly in the universe (of the other entries in the franchise). There’s a lot of fun callbacks, and there are direct lines to the past. But part of the goal of making this movie was to create something that could expand the Evil Dead universe further.”

“There’s no Ash in this story, and there’s no cabin in the woods, and they’re two iconic elements of what Evil Dead is. But the movie does include the book and an extraordinary amount of vicious, malevolent Deadites, so I was always pretty comfortable making that move [to L.A.]. It still needed to maintain some claustrophobia, which translated well from the cabin into an urban environment. This is about a family in a rundown building stuck in their apartment, so it follows the same rhythm but puts it in a more contemporary space.“

Though story is set in Los Angeles, but filming has been on location in New Zealand—maybe the lack of a thick layer of smog is a dead giveaway.

Evil Dead Rise will star Lily Sullivan and Alyssa Sutherland as the estranged sisters at the center of the story. Unfortunately, legendary star Bruce Campbell won’t be appearing in the movie as the actor has repeatedly said that he has retired from the role.

In interviews, Rami said he chose the director for this installment in his Evil Dead franchise after viewing Cronin’s directorial debut, The Hole in the Ground. A synopsis is the most of what we’ve gotten so far regarding Evil Dead Rise’s storyline and gives us a better understanding of what to expect:

A road-weary Beth pays an overdue visit to her older sister Ellie, who is raising three kids alone in a cramped L.A. apartment. Unfortunately, the sisters’ reunion is cut short by the discovery of a mysterious book deep in the bowels of Ellie’s building. It’ll give rise to flesh-possessing demons and thrust Beth into a primal battle for survival as she is faced with the most nightmarish version of motherhood imaginable.

Evil Dead Rise was set to premiere on HBO Max, but the high score with audience test screenings has now elevated the film to a theatrical release on April 21st.