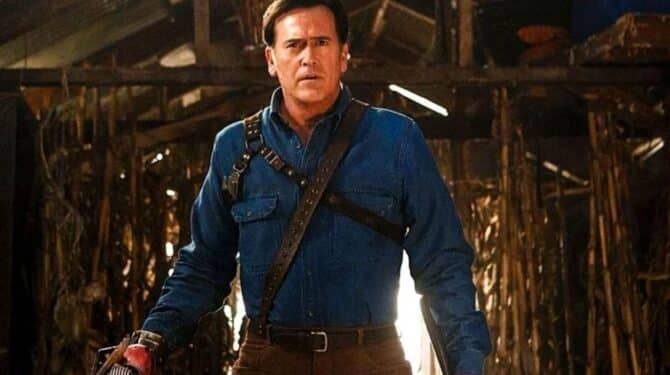 After Ash vs Evil Dead concluded prematurely, fans have been begging for Bruce Campbell to return as Ash. Unfortunately, the actor soon announced that he was retired from the role. While he’s still returning to voice Ash for the upcoming Evil Dead: The Game, Bruce Campbell now admits that it’s because he just “physically can’t do” Ash anymore.

He revealed this while speaking with Collider for his new film Black Friday. Apparently playing Ash just took too much of a toll on his body and he couldn’t keep up because of his age.

“Whatever the cliched phrase is, I left it all on the table. I’ve got nothing left to give,” he explained. “There’s not gonna be any traditional form of ‘Evil Dead’ anymore. Ash is gone. I’ve retired the character because I physically just can’t do him anymore, so why bother?”

Apparently this was also an issue while he was still working on Ash vs Evil Dead as well. He apparently took the time to communicate with all of the directors about his knee problems.

“If you saw the emails pleading with various directors that were like, ‘Hey, my knee’s not working right.’ ‘Be careful about tomorrow.’ ‘Let’s have the stunt guy nearby.’ ‘Hey, I can’t run anymore.’ It just was an endless physical struggle,” Campbell recalled.

If fans feel like he doesn’t care about the character, however, Bruce Campbell notes the opposite. He was incredibly happy for what he was able to do in Ash vs Evil Dead and expand the world of the franchise.

“I’m really glad we did it because we saw Ash’s home, we went into his bedroom, we met his girlfriends, we met his daughter that we never knew he had and that he never knew he had, and we met his father, played by the great Lee Majors,” said Campbell. “I feel we really pushed all the buttons and he fulfilled his destiny written in that ancient book [the Necronomicon]. He was the guy destined to defeat evil in the past, present and future, and he took off with a hot robot chick at the end to go kick in the future.”

He also further emphasized that Ash vs Evil Dead really is the end of Ash’s story:

“What else do you need?” he concluded. “We knew the ratings were bad. We knew, going into the last season, that we had to have an end because we didn’t think Starz was gonna re-up us and we were right. So, thank God we did that.”

It looks like Bruce Campbell really is done with playing Ash, at least as far as live-action is concerned. On the bright side, fans will get to see Ash make something of a comeback in the upcoming video game. What’s more, the film franchise is set to continue as well. We’ll be getting a brand-new movie next year titled Evil Dead Rise. Although the new film is set to focus on new characters and settings, it sounds like it’ll have plenty of the gore and tension that fans are familiar with.