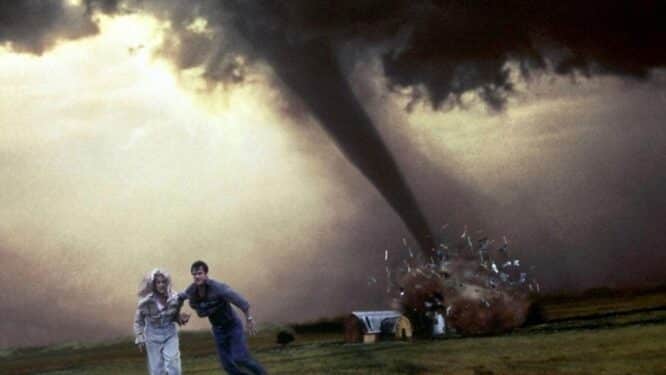 Minari was an Oscar-winning film that catapulted many of its stars’ film careers. Twister was a box office hit with a ridiculous concept. So someone thought it might be an excellent idea for these two projects to meet for a film on the big screen. Reports have revealed that Minari director Lee Isaac Chung is set to direct the sequel to 1996’s Twister, which starred Helen Hunt and Bill Paxton.

Deadline has reported that the 1996 blockbuster, which featured a story circling tornado chasers, finally found its director in Chung. Frank Marshall, who recently helped produce Jurassic World: Dominion, is also set to produce the film. Marshall will have the movie under his Kennedy/Marshall banner, and Warner Bros. Pictures is set to co-finance the project.

But wait, there’s more. Mark L. Smith, whose writing skills helped Leonardo DiCaprio win an Oscar in The Revenant, will pen the script. This Twister sequel might be the most high-art disaster film ever conceived.

Chung’s Oscar-winning drama, Minari, followed the lives of a Korean-American family and garnered much acclaim from critics and audiences. Steven Yuen of The Walking Dead fame starred as the family’s father, and the Academy Awards recognized his performance for Best Actor. Also starring in Minari is Youn Yuh-Jung, which role led her to an Oscar win for Best Supporting actress.

So far, securing a director and writer for Twisters—seriously, that’s the title—has taken up most of the time in the early stages of production. No cast has been officially announced, but it’ll be interesting to see who’ll step up to the plate to star in the film. Also, there’s no indication that any of the original cast will appear.

No plot details have been shared with anyone outside of the development process, but we can guess that it won’t be too far from the original concept of Twister.

Twisters has yet to set a premiere date, but I’m sure we’ll find out soon.