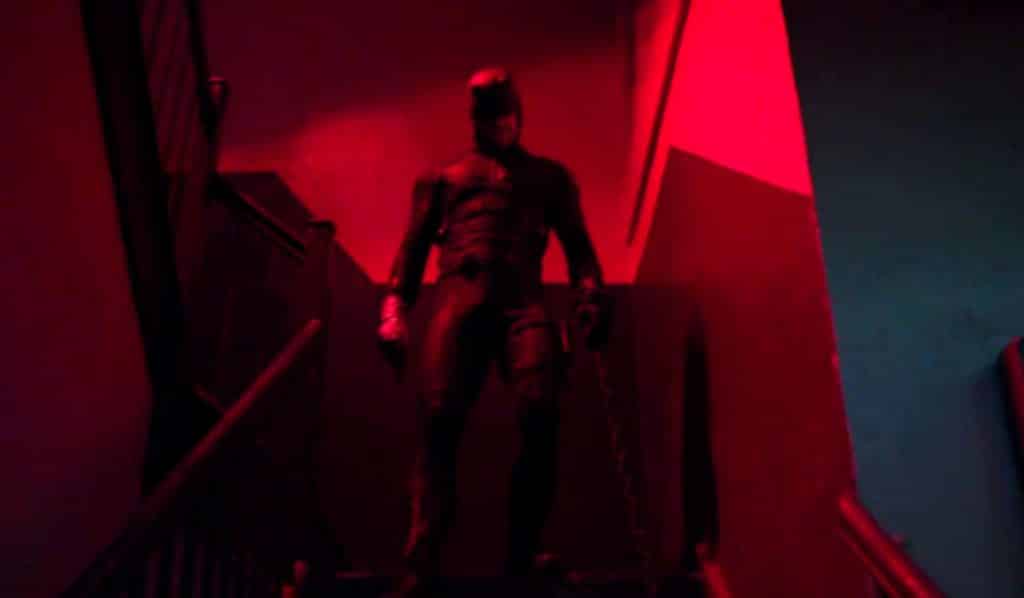 Today saw the release of the final explosive trailer for Marvel’s The Punisher, which will premiere next month. Frank Castle’s debut season marks the sixth collaboration between Netflix and Marvel. It also means that trying to keep track of the status of each individual Defenders character series is now becoming somewhat of a full-time occupation – especially with the latest Daredevil teaser.

So why not let us take the effort out of that task, and bring you quickly up to speed on where everybody’s show currently stands? Marvel’s Jessica Jones Season 2 has already finished production, having flooded the internet with shots of David Tennant’s Kilgrave mysteriously returning from the grave. Marvel’s Luke Cage Season 2 is currently filming in and around NYC, with Finn Jones pictured on-set to tease some upcoming ‘Heroes For Hire’ tomfoolery. This confirms that Season 2 of Marvel’s Iron Fist is still in pre-production, which only leaves Season 3 of Marvel’s Daredevil outstanding.

If the ending of August’s The Defenders is anything to go by, Matt Murdock’s third solo outing is going to be something of a rough ride for the DevilOf Hell’s Kitchen. Seemingly buried beneath the wreckage of a toppling skyscraper, the season’s closing scenes saw a crippled and bed-bound Murdock, far from being in the fighting form we’re used to seeing him in.

Production on the show starts this month, and the first viral teaser for the series has already landed online. This week, the official Daredevil Twitter account quietly uploaded a short video depicting what appears to be a short eulogy. Alternating between typed text and braille, the document contains a quote from Proverbs 25:26, displayed under a header that declares “In Loving Memory Of Matthew Murdock”:

Of course, you don’t tend to have a eulogy without a funeral service, which indicates that despite having somehow survived having had a building on his head, Matt’s miraculous escape will remain a secret from his friends and allies. It also suggests that the current hospitality he is enjoying courtesy of the Catholic Church may be more permanent than at first hoped, with his funeral taking place whilst he lies helpless and in hiding.

Reasons for this could be Matt having resolved to keep his distance from his loved ones, unable to deal with the guilt he was feeling throughout The Defenders. It could also be due to the severity of the injuries he sustained during his final battle with Elektra, or maybe some form of memory loss. Either way, it makes the prospect of a good old corridor-fight in he opening episodes of Season 3 an unlikely prospect.

Theories already abound about the villain Murdock will be facing in the upcoming series after a casting call appeared online searching for a former FBI agent, with athletic build and anger management issues. This could be anyone from Taskmaster to Bullseye, to even the lesser-known Sin Eater. Whoever it is, with The Hand now out of the picture, and Wilson Fisk steadily re-establishing his power base from behind bars, the show is need to come up with something pretty special to keep the fans entertained.

Marvel’s Daredevil Season 3 is due for release at some point in 2018.