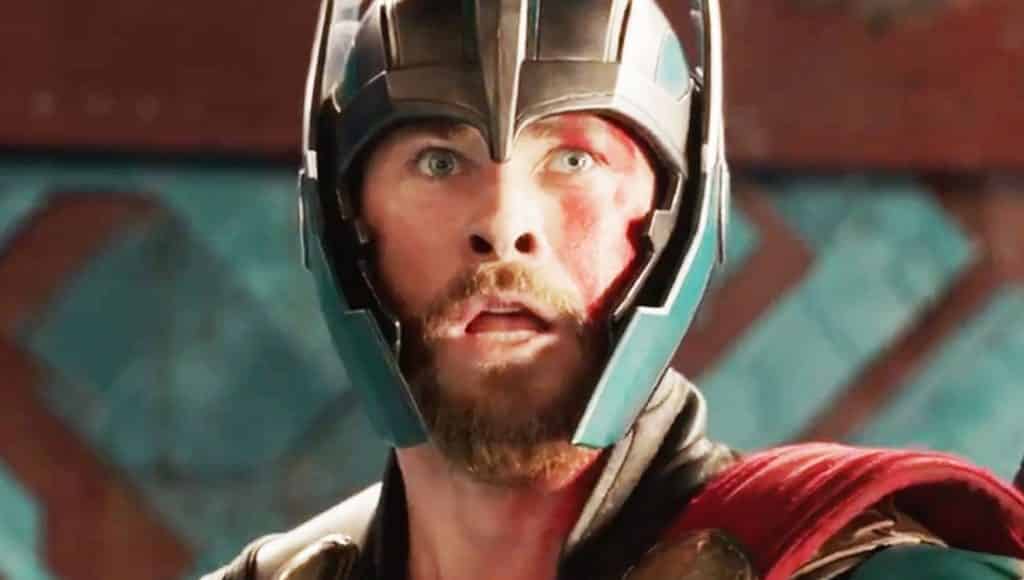 There’s no real reason on God’s green earth why Thor: Ragnarok should work. Blending fantasy that’s lifted almost directly from the pages of Lord of the Rings, with a storyline that wouldn’t be out of place in a Star Trek script, on paper it’s an uneasy beast. And yet, work it does. To fabulous effect. Obvious SPOILERS ahead!

Trying to explain the movie’s tone to people who haven’t yet watched it is also not an easy task. Yes, on the surface it’s a riotous laugh-fest. There’s that truly bonkers cameo from Matt Damon. Stan the Man’s customary mirthful walk-on. Taika Waititi’s chipper Spartacus-esque Korg challenging the tyranny of Jeff Goldblum’s cruel-yet-caring Grandmaster. But you try telling that to fans of the Warriors Three…

With little warning or explanation, after a five minute period, all three of Thor’s closest friends lie dead. There’s nothing in the way of bravery or self-sacrifice to accompany their departures. Following a decade of working for Marvel, and with a hat-trick of appearances as Volstagg, all Ray Stevenson gets to deliver is a gormless facial expression as he’s dispassionately knifed to death. Still, that’s more than Zachary Levi gets. He fought long and hard to bag to play Fandral after scheduling issues initially cost him the role, and is rewarded with a complete non-event of a death.

Of the three, it’s Tadanobu Asano’s Hogun who gets the closest to a meaningful exit. A few rebellious words and sword strokes later and he lies also impaled on a giant necro-spike. His death as meaningless as the other hundred or so faceless warriors he now lies amongst. So, sitting alongside the rest of the merriment and mirth this movie is packed with, what possessed Marvel to green-light such a brutal character cull?

It’s conceivable that the casual nature in which the three main Asgardian champions meet their end might have been some kind of attempt by the writers to showcase the magnitude of Hela’s powers, and highlight her merciless attitude towards the conquest of her enemies. If that was the intent, it pretty much fails. Set in the context of the casual slaughter of the entire Asgardian Army and Air Force, the deaths of the three friends carry little to no real impact.

Setting that explanation to one side, it’s also possible that this is Marvel laying the foundations for a future policy change within the MCU. One of the most regular criticisms to be labelled at the company is their apparent reticence to kill off their main characters. In days gone by, an old school moustache-twirling Marvel Cinematic Universe villain would have pointlessly spared the three warriors, choosing to instead imprison or hostage them until the danger is then predictably averted.

With the directors of Avengers: Infinity War dropping major hints that their movie will see the death of at least one Avenger, is this Marvel starting to prepare their writers and audiences for what may be a very bitter pill to swallow? Maybe, but then perhaps the movie’s ending, and the direction that it now points the Asgardian survivors in, may offer a third answer to what still feels like an almightily uncomfortable narrative misstep.

A number of significant Asgardian characters are not referenced during the massacre of Asgard, including Lady Sif and Tyr. It’s conceivable that they and others survived these events and will be making a comeback in the ongoing MCU timeline. The presence of a new character such as Valkyrie also teases there may be other Asgardians scattered throughout the universe who may also crop up at a future point. It’s entirely possible Marvel simply felt the need to do a bit of housekeeping to the Thor sub-franchise fresh, and to free up space for the addition of new or returning Warriors.

Then, there’s intriguing option number four. Prior to that somewhat foreboding end credits scene, Thor announces that the space-ark containing the refugees is heading for Earth. This is relatively in keeping with the original source material that saw Asgard re-established in Broxton, Oklahoma after the end of the Ragnarok comics event.

The ‘Secret Invasion’ and ‘Siege’ storylines saw the dead Asgardians magically reincarnating on earth, sometimes in different ages and genders to those of their original forms. It could well be that we’ll see The Warriors Three materializing again at some future stage, or being re-cast and returning to the franchise with new actors and actresses.

Regardless of the whys and wherefores of why these iconic characters were so carelessly disposed of, it would be a crying shame if that was the last we saw of them. With Asgard’s supreme control over magic and technology, there are countless opportunities to right this wrong, and see the three champions make a big comeback. Maybe even alongside Odin and Skurge. I mean, who amongst us doesn’t want to see more Skurge?

What The Original Michael Myers ‘Halloween’ Mask Looks Like Now
Update: Disney and Fox Deal Was Discussed – But Is Now Dead
Advertisement
Advertisement
To Top