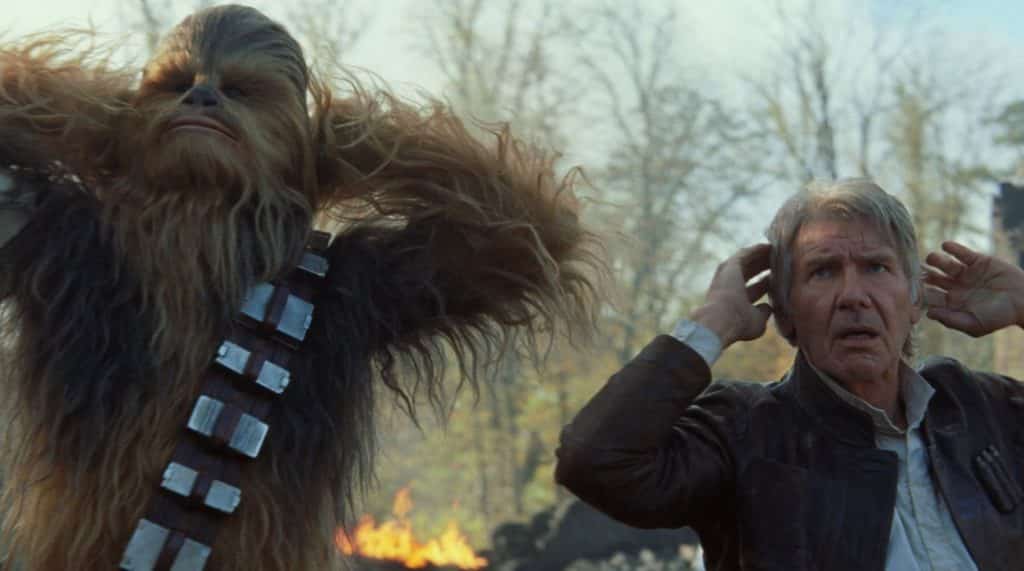 With one of the biggest twists in recent history, the fate of Han Solo in the end of Star Wars: The Force Awakens still hurts many fans to this day. (Obvious spoilers if you haven’t seen the film)The emotional investment of journeying along one of the mains of the original trilogy only to see his time end by the hands of his son was not something we were prepared for, both fans and characters alike. It leaves a lot of sympathy for Chewbacca, the most loyal Wookie friend and partner a bounty hunter could ever have.

With actor Joonas Suotamo, his first drive as the new Chewbacca was in The Force Awakens and continues to play the role splendidly to even the latest film focusing on Han with Solo: A Star Wars Story. All the Wookie boot camp training prepared by Peter Mayhew had him prepped to take on any challenge the film had to throw at him for physical perfection as the companion of Han Solo. But was he as prepared as the rest of us for the demise of a beloved Star Wars character we all grew to love?

Speaking to him at Toronto ComiCon 2018, I asked him what was the initial reaction of filming the death of Han Solo – it seems he wasn’t the only one who was affected:

On a note of darker humor, I also asked how Porg meat would probably taste like:

“As you can see in The Last Jedi, I turned away at the last second from tasting that Porg because they’re just so damn cute. I just couldn’t do it. Wasn’t man enough.”

He did however recommend what kind of barbeque sauce would be best put on Porgs:

“I recommend HP BBQ Plus.”

Suotamo returns as Chewbacca in Solo: A Star Wars Story, opening May 25th.

What did you think of Han Solo’s death in Star Wars: The Force Awakens? Are you looking forward to the new Solo movie? Be sure to tell us all of your thoughts in the comments!