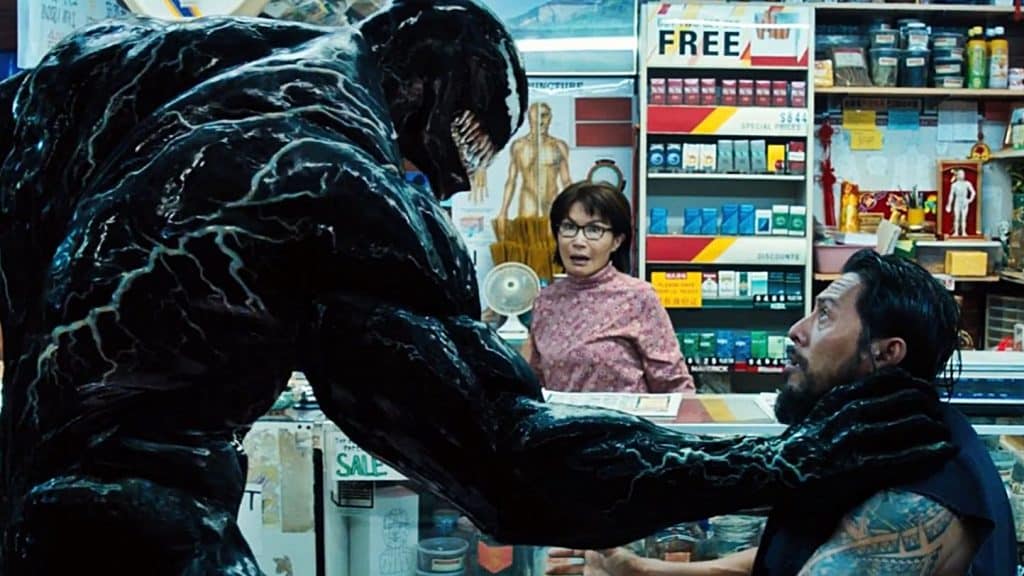 We were given a new trailer for the Venom movie this week, and with it – comes dissection of everything. It’s the norm whenever a comic book movie trailer is released, as some people love to find things to complain about. The first trailer obviously gave us something to complain about, as it featured no Venom. The second trailer was a big improvement, but people complained about the way symbiote was said. This new trailer – seems to have fixed that.

It appears that the characters are saying symbiote the way it was pronounced back in the 90’s Spider-Man cartoon, but now, people are annoyed at how Venom talks – and one line at the end of the trailer in which he describes how someone will be when he’s finished with them. The line is:

We will eat both your arms, and then both of your legs, and then we will eat your face right off your head. You will be this armless, legless, faceless little thing, won’t you? Rolling down the street like a turd in the wind.

Jesus the dialogue in the new Venom trailer is nearly incomprehensible except for the “turd in the wind line.” Glad a child wrote it. What the fuck does Tom Hardy say at the end, “Oh, I have the power to bllmrbsay”?

Finally saw the second #Venom trailer. I was skeptical when he said, “Like a turd in the wind.” Then someone pointed out that it was the symbiote talking based on its limited knowledge of human speech and metaphors, not Eddie.

To those claiming that #Venom trailer is faithful to the comics, let me just say that I used to read ’em on a regular basis, and I don’t ever recall him comparing one of his victims to a turd rolling down the street in the wind. If he had, I would have stopped reading.

“You will be this armless, legless, faceless thing won’t you? Rolling down the street…. like a turd. In the wind.”
– Venom

Whoever wrote the script for this movie is either terrible at writing, or a GOD.

What the Hell is a turd in the wind? What does that even mean? Why is it coming out of Venom’s mouth? Why is Venom talking about turds? How does he even know what turds are? pic.twitter.com/RDAefUagle

Guess what time it is!? That’s right! It’s time for inspirational quotes with Venom! Let’s look at today’s quote!

“You’ll be this armless, legless thing, won’t you? Rolling down the street, like a turd…in the wind.”

Just saw the new venom trailer. I can’t believe they wrote “turd in the wind” as something that would come off as intimidating. The absolute state of Sony pictures. pic.twitter.com/E3cmYJhFn2

You: “Venom isn’t supposed to tell jokes! Sony ruined him!”

To me, the problem is not that he’s telling jokes, I always knew that Venom had a dark sense of humor BUT the problem was the execution and the way they were said in the trailer. “Turd in the wind” WTF?! 🤦‍♂️

I’m pretty sure there’s some comics where Venom says something as stupid as “turd in the wind”. He’s got a bizarre sense of humor from what I know and this looks to respect that. I’m excited.

Why is Venom talking about turd in the wind?
Why did Venom lick the man he was about to eat in public?
Why did he tell the man in the store that he was gonna eat him?
Why did that woman with a symbiote kill a man even though he didn’t do anything wrong?

Them: How’s your day going?
Me: I got to hear #Venom say ‘rolling down the street like a turd in the wind’ so it’s going good.

Also, my biggest takeaway from the new “Venom” trailer is that Venom uses “turd in the wind” as an insult.

Nothing this year will be dumber than “Fuck Batman!”.

Venom trailer: Hold my turd in the wind.

It’s been 24 hours. And I can’t stop thinking about that “turd in the wind”line in the Venom movie. People wrote it, read it, approved it, and edited it.

Social Media: “hahahaha they can’t say symbiote”
Sony exec: “We can’t have another divisive piece of dialogue in Venom after the symbiote stuff”#Venom writers “Rolling down the street… Like a turd… In the wind” pic.twitter.com/Hcu5XFTM5t

Although, there’s one thing I can admit about #VENOM. The minute Venom said “Like a turd in the wind.”, all I’m thinking is why does that line sound like it was written like a Fifty Shades of Grey movie?

Strange thing is, one of the writers of this Venom, wrote that movie!!! 😥

I can’t be the only one who could barely understand what was happening in the #venom trailer. pic.twitter.com/oObFrfxqdP

That #Venom trailer looks so good, but am I the only one who can’t understand a word he says in the Venom suit?

There is also a group of fans who are boycotting the movie, so maybe, if this line of dialogue offended you to that point, you can join them. For everyone else, Venom will be in theaters on October 5th.

What did you think of the trailer? Did it bother you at all or did you enjoy it? Be sure to tell us your thoughts in the comments down below!