The movie world is filled with burning cinematic questions that society has yet to find satisfactory answers for. Will Dwayne Johnson ever turn down any movie idea that’s pitched to him, however bizarre? How does Kevin James keep persuading people to cast him in movies? Is there anything left in life that Jason Statham hasn’t kicked or punched the shit out of on screen? But, most important of all, why does AVP: Alien vs. Predator get so much hate?

I guess a lot of it is to do with the fact it spawned arguably the worst sequel in film history (which is no small accolade when you acknowledge the existence of Sex In The City 2…). Aliens vs. Predator: Requiem was a BAD BAD movie. A cynical and rushed cash-in on the franchise that was prepared to break all the existing rules and restrictions on the characters in order to make a quick buck. But I’m not here today to defend that pile of crap (let it burn…). I’m here to remind you why you should revisit and rethink the original AVP movie.

When asked for their feelings on the 2004 offering, at best sci-fi fans respond with a shrug of the shoulder, accompanied by. a half-hearted “meh”. At worst they lament the lowest point in either franchise, and the lost potential of what could have been. Neither reaction is really fitting for what is, in essence, what the fans had been waiting for. The fact the film made back three times it’s production budget and garnered a sequel (however poor…) are a testament to the fact that their really is nothing wrong at all with this movie.

For decades, school playgrounds and university halls had witnessed unending arguments and counter-arguments about who would win in a fight. The guy with wrist claws and a shoulder laser, or the fella that bleeds acid and has a spear for a tail. It was a subject that had already been covered in depth by numerous canonical books and comics, but AVP finally provided moviegoers with the answer they’d been searching for. 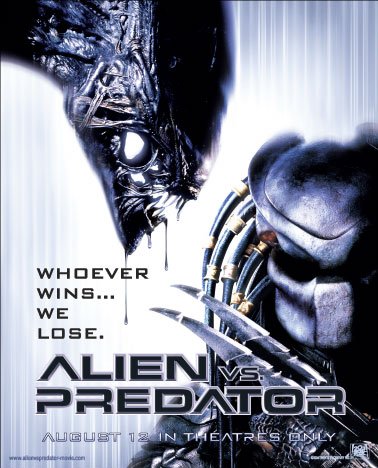 When going head to head, the two extraterrestrial races are equally as deadly as each other. Some individual Xenomorphs are stronger and more intelligent than some Predators, and vice-versa. But the alien will nearly always win out in terms of sheer determination and superior numbers. The only answer the Predators have to this is their self-destruct option, which means when they profess past a certain point in the fight, the best they can hope for is a tie.

AVP manages to successfully include and combine the backstories of both movie villains, building on the iconic ‘skull’ Easter egg at the end of Predator 2. It establishes the symbiotic relationship between the two murderous entities. The Predators need the Xenos to underpin the hunter/warrior basis of their society, and the aliens need them in order to travel and expand throughout the universe. Both need the other just as much as they hate them.

Shoulder cannons are offset by the tactical use of face-huggers. Acid-proof netting is matched by the stabbing tail of the Xeno. Wrist-claws are equally as deadly as a retractable inner-mouth. The movie is the ultimate extraterrestrial Royal Rumble, with both sides throwing everything we’ve seen in their previous movies at each other, with a little bit more.  And when all that’s been deployed, it all falls down to some slo-mo sequences of brute strength and desperation.

The movie’s setting of a subterranean Aztec ice pyramid is a master-stroke. Not only does it provide some gorgeous sets for the characters to interact with, but the inclusion of a whole host of traps and diversions as the environment morphs and changes around the fighters means that the action never gets dull. The set-pieces are quick and innovative, the visuals colourful and memorable. Sure, it’s not not on a par with either of the original Alien or Predator movies, but it far outstrips the majority of the other tired sequels.

And let’s not forget the human players in this epic conflict either. The cast is filled with a host of actors who are all drawn to the genre, and give it their everything. Lance Henriksen nails it as the genial but morally corrupt Charles Weyland. Colin Salmon (Resident Evil) and Tommy Flanagan (Sons Of Anarchy) both give tropically strong performances, alongside the dependable Carsten Norgaard (The Man In The High Castle) and Ewen Bremner (Trainspotting).

The film also retains the sense of female empowerment that originally made the Aliens franchise such a great success. Lead actress Sanaa Lathan (Blade) successfully channels a young Ellen Ripley, and she’s one of two strong female characters who precede the #MeToo movement by over a decade. These women don’t need a man to save them, and end up doing most of the saving themselves.

Sure, it’s not all plain sailing. This incarnation of the Weyland company is out of kilter with the rest of the Alien franchise, and is jettisoned for all the other movies. Lead actor Raoul Bova also feels surplus to requirements, and is largely forgettable. But this is exciting stuff, and more importantly, it’s fun. So go and track it down and give it another try. You won’t be disappointed…

Continue Reading
You may also like...
Related Topics:Alien, Alien vs. Predator, Predator