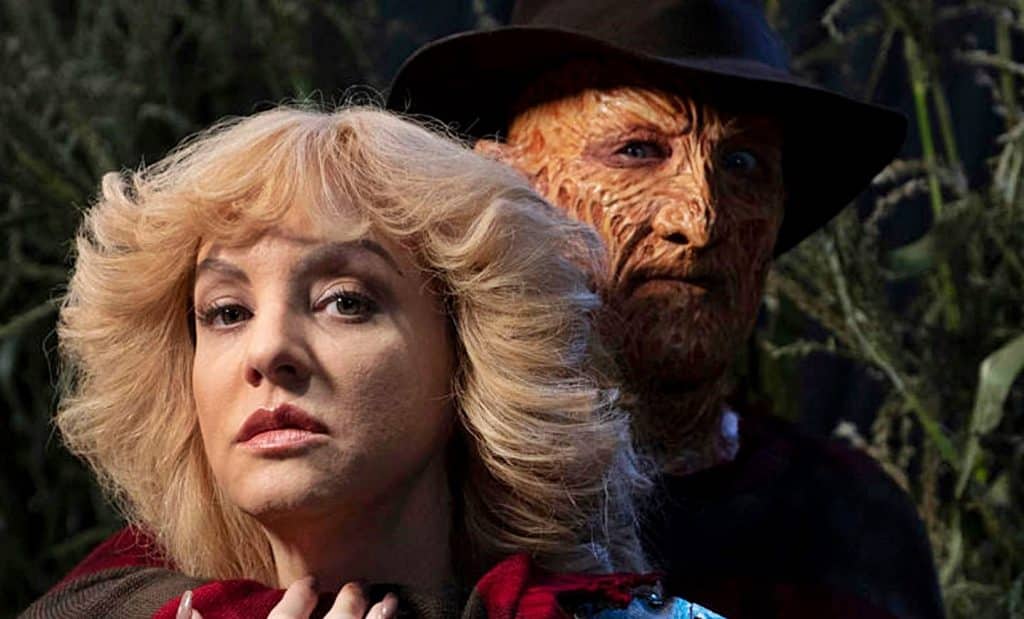 The Nightmare on Elm Street fanbase has had something of a gift today. Most fans assumed Robert Englund was totally done with his role as Freddy Krueger, a character we haven’t seen since 2010 in a half-hearted remake featuring a new Freddy played by Jackie Earle Haley. The original Freddy was last seen even before that, with 2003’s Freddy vs. Jason. But now Robert Englund is donning the makeup once again for a special guest appearance in The Goldbergs.

That’s right, Englund is finally returning as his iconic 1980’s slasher villain for the 80’s-set sitcom. His character will be in full-costume, including the signature sweater, fedora, and razor-equipped glove.

The episode will be titled “Nightmare on Elk Avenue”, and follow the show’s teenage protagonist Adam after he sees A Nightmare on Elm Street for the very first time. It’ll be interesting to see how he responds to Freddy, and just how large a role Robert will have in the episode. Even if it’s just a few seconds, it’ll be fun to have Robert show us how Freddy is really done one last time.

Here’s a preview with Englund in makeup below, teasing the episode’s premiere in October.

#TheGoldbergs Halloween episode this year is going to be a NIGHTMARE! @RobertBEnglund will guest star as the one and only Freddy Krueger! pic.twitter.com/JduaQYqeiP

It’s honestly a really cool feeling seeing Robert once again as Freddy Krueger. He’s worn the makeup in conventions since Freddy vs. Jason, but getting to see him on screen with full voice effects and everything is wonderful. Hopefully he gets a really scary scene or two to really showcase his charisma.

While it’s still unlikely we’ll get another film featuring Englund, it would be fantastic if he was somehow used for a new sequel to the original movie. After all, if the new Halloween does well enough, who’s to say that Warner Bros. wouldn’t mind trying to revive some of their older horror properties? They seem to be having a lot of current success with The Conjuring Universe and their adaptation of Stephen King’s IT. They’d be foolish not to give Freddy another chance at slashing his way to the big screen.

Either way, let’s be happy to see whatever Robert Englund gives us with his appearance on The Goldbergs. It’s better than nothing.