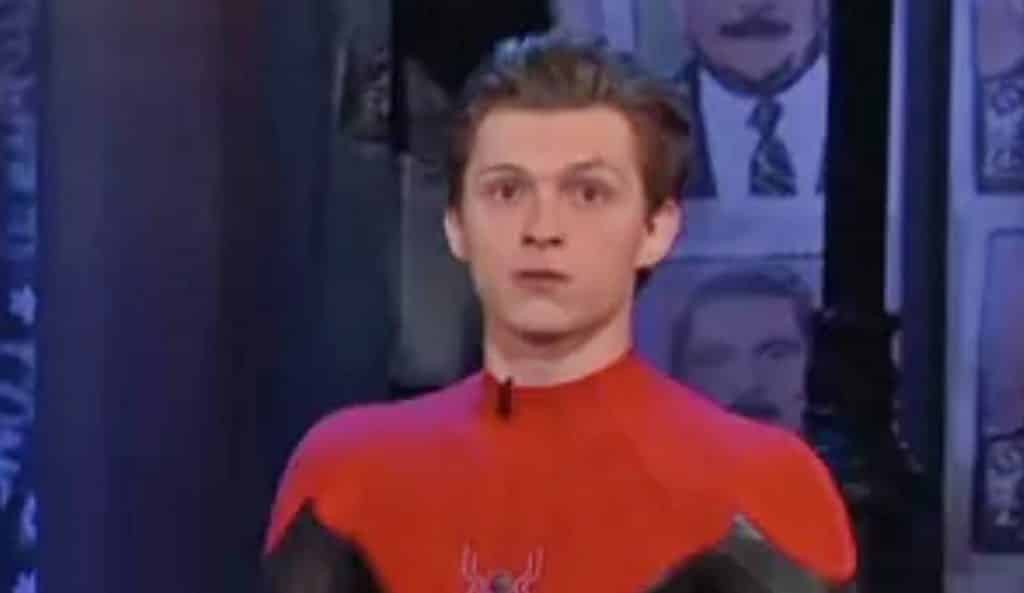 We all know that Tom Holland is the King of Marvel spoilers. As an excited young man getting to live out his dream of being a superhero, and the iconic Spider-Man nonetheless, it’s really hard sometimes to not let secrets slip. Marvel has taken extensive lengths to limit his “spoiler” abilities, like having costars block his answers in interviews or just not giving him a script for the still untitled Avengers 4. But, there are times when Marvel Studios eases up on his tight leash a bit and let’s him “slip” a spoiler or two, like Marvel Studios Head, Kevin Feige, letting Tom reveal the title for Spider-Man: Far From Home on his Instagram account. Now, Tom Holland “accidentally” reveals Spidey’s new costume for Far From Home on Jimmy Kimmel Live!

While we’ve seen quite a few leaked BTS photos and videos of the newest Spidey suit in action, a hilarious skit with Guillermo on the late night show gives us the clearest view of the Alex Ross inspired black and red suit, and it looks Amazing! Spectacular! Sensational! (Yes, these are all Spidey puns… Don’t judge me…) This also means that we will be getting at least 3 different suits for the Wall Crawler in the sequel, with his Homecoming suit, his S.H.I.E.L.D. stealth suit, and now this.

.@TomHolland1996 shows @IamGuillermo what it takes to be #SpiderMan… @Marvel pic.twitter.com/jyoj3n09Z5

The skit itself was great, with Guillermo stealing Holland’s mask backstage and coming out, with hilarious (and terrible) sound effects, proclaiming that he was Spider-Man. Enter Holland, with a traffic cone on his head as a last minute make shift mask, before revealing the beloved actor. After a little back and forth, Guillermo finally returns Holland’s mask, then Kimmel (knowing Holland’s pension for spoilers) tries to press for information on the upcoming movies, even taking a stab at the fairly ridiculous prequel fan theories. Holland deflects by saying he has to go because Thanos is robbing a bank. Kimmel asks why Thanos would rob a bank, and Holland says its because Thanos is poor, before showing off his awesome gymnastic skills and flips offstage.

Disney, Marvel Studios, and the Marvel Cinematic Universe are in a very unique position as a film company. With over a decade of success building a unified film universe, Marvel doesn’t really have to market their films anymore. The anticipation for all of the upcoming movies is at a fever pitch, and they could easily not even release a trailer now, and they’ll still set box office records with every release.

But, with the principal filming for Far From Home wrapping recently, maybe we’ll get some kind of trailer in the next few months. No matter what Marvel does, though, I’m sure all of us fans will be lining up to see the Spidey sequel in theaters next July.

What do you think of Spidey’s new duds? Are you excited for the sequel? Let us know in the comments below!