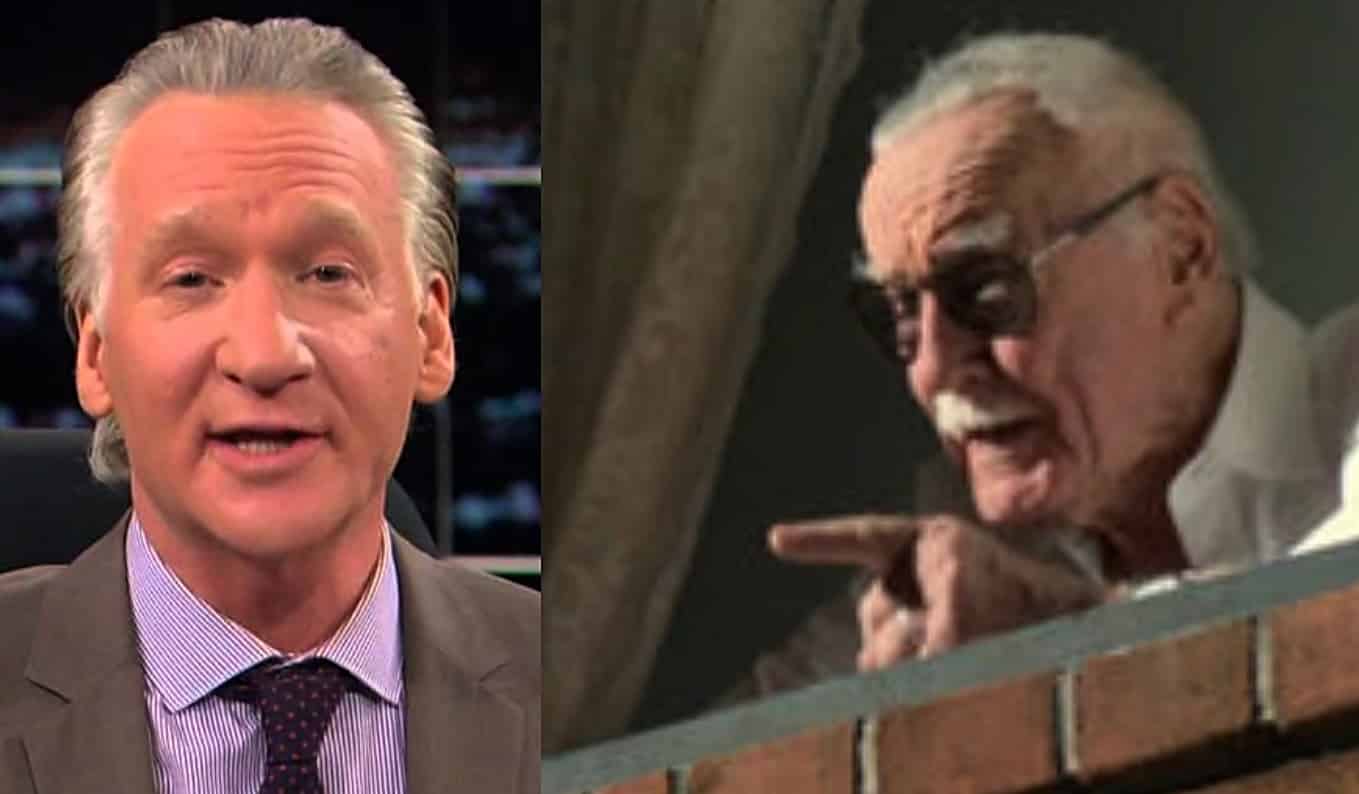 Some people just don’t know when to quit. They put their foot in their mouth, get called out on it, and rather than apologizing or simply just staying quiet on the subject, they subsequently stick the other foot in their mouth with another idiotic outbursts! And, on top of that, outburst two contradicts outburst one, making the self proclaimed “highly intelligent” person look that much stupider. The person in question is non relevant political comedian and all around attention seeker, Bill Maher, and his recent comments about Stan Lee.

Maher recently took to his blog to basically condemn and insult the millions of people who were mourning the passing of American icon, Stan “The Man’ Lee. He found his work childish and the “dumbing of America”, and the reason why his nemesis, the polarizing President Trump, was elected in the first place. Since then, Maher has been under heavy fire from fans, celebrities, and more. Stan Lee’s own POW! Entertainment responded with an eloquent and well written response, which should have seemingly been the end of it. It was not. During a Larry King interview, Maher “clarified” what he meant, which, quite frankly, made him look even dumber.

“But talk about making my point for me: Yeah, I don’t know very much about Stan Lee and it certainly wasn’t a swipe at Stan Lee. Yeah, fine. I am agnostic on Stan Lee. I don’t read comic books. I didn’t even read them when I was a child. What I was saying is, a culture that thinks that comic books and comic book movies are profound meditations on the human condition is a dumb f**king culture. And for people to get mad at that just proves my point.”

First off, Maher contradicts his previous blog post by saying he never read comic books, not even as a kid. However, in his first post, he clearly states that he would read them as kid but not now that he’s “grown up”. Second, for someone who thinks that comic book movies are a joke, he certainly had no issue with making a cameo in Iron Man 3. But, hey, Marvel paid him for that, and now he’s getting “paid” in publicity for his moronic ramblings. Thirdly, his ignorance towards comic book culture is profound beyond belief. Comic books actually do carry a heavy commentary on the human psyche and cultural issues, such as racism, equality, tyranny, and more.

For someone so educated, you would think he would understand that you don’t talk about things you know nothing about. He openly admits to knowing nothing about comics, yet he makes asinine assumptions off of a diluted face value. That’s the very thing he attacks people for on his show. That ignorance is the same as racism. Judging a book by its cover. In other words, Bill Maher is a bully.

Comic books are part of the lexicon of American Literature. Superheroes represent a modern mythology, telling the stories and fantasies of a people, like Homer’s “Odyssey” or Shakespeare’s “Hamlet”. Now, some may think it’s a huge stretch to compare Lee’s work to the likes of Shakespeare, but think about this. Lee tackled the Civil Rights Movement and Equality with the X-Men. He portrayed the Hero’s Journey better than anyone with the likes of Spider-Man, The Hulk, and more. He helped create the first ever black super hero, and constantly put women in positions of power. He gave you deep characters with flaws and humanity.

Maybe comic books are just too high brow for Maher. And, ignorant people insult things that they don’t understand. In a way, I feel sorry for Bill. He lives a perpetually angry life, and that must be a miserable existence. Maybe he should pick up a comic book and relax…

What do you think of Maher’s continued attack on comic book culture? Let us know in the comments below!