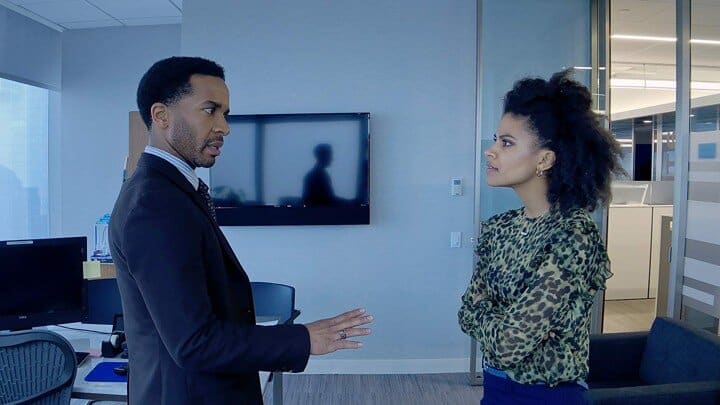 Steven Soderbergh is one of the most accomplished directors in the industry, with a lot of that being credited to his ability to evolve. Even at the age of 56, Soderbergh continues to expand his range, now focusing on crafting low-budget films via iPhones. His latest High Flying Bird is a testament to that evolution, a film that loudly and proudly fights against the system with winning results.

Set during the NBA lockout, High Flying Bird follows Ray, a sports agent who is trying to navigate his young star Erick (Melvin Gregg) through the NBA shutdown. Ray, along with his former assistant (Zazie Beetz), devise a plan to create new business opportunities to force owners hands at ending the lockout.

High Flying Bird is a sports movie with very little of the sport actually being played, rather focusing on the damaging ecosystem of sports leagues and the money-hunger owners who reek all the profits. Capturing that culture with insight, humor, and humanity, this is a razor-sharp film that is among Netflix’s best original content.

I’ll get to Soderbergh in a moment, but the real beating heart of this film is its screenplay. Oscar winner Tarell Alvin McCarney continues to prove his talent here, failing to miss a beat with his latest effort. McCarney captures the complex sports industry with thought and authenticity, while also effectively using the subject matter to show systemic oppression. This angle isn’t just a motif, as McCarney digs into the sport’s soulful roots that lie under the system of greed, roots that are the driving force for many of the film’s central characters.

Similar to Moneyball, High Flying Bird isn’t a traditional sell because of its more cerebral subject matter, but McCarney is able to make its content easy to digest, even for non-sports fans. The dialogue is sharp and quite funny when it needs to be, but its never taken to the Sorken-like extremes where it can feel out of place. Similar to the film’s protagonist Ray, McCarney balances the busy narrative with a sizable roster of characters masterfully.

Bringing Ray to life with a fantastic leading turn is Moonlight star Andre Holland. He imbues a strong sense of swagger and personality into the character, yet its those small moments of introspective reflection where Holland truly shines. He is a truly gifted actor and I hope he continues to land major roles going forward. Zazie Beetz, Melvin Gregg, Bill Duke, and Stranger Thing’s Caleb McLaughlin round out the cast with assured and distinctive performances.

Running point and helping his teammates shine throughout is Soderbergh (couldn’t do this review without one overt sports reference), who continues to amaze with his technical ability. He doesn’t use his iPhone camera work as a gimmick, rather an effective means of capturing the fast and furious sports world. The tech never feels like a hindrance, as the visuals are strong and thoughtfully-conceived. High Flying Bird is accomplished in its depiction of the sports world, with everyone involved delivering an all-star effort.