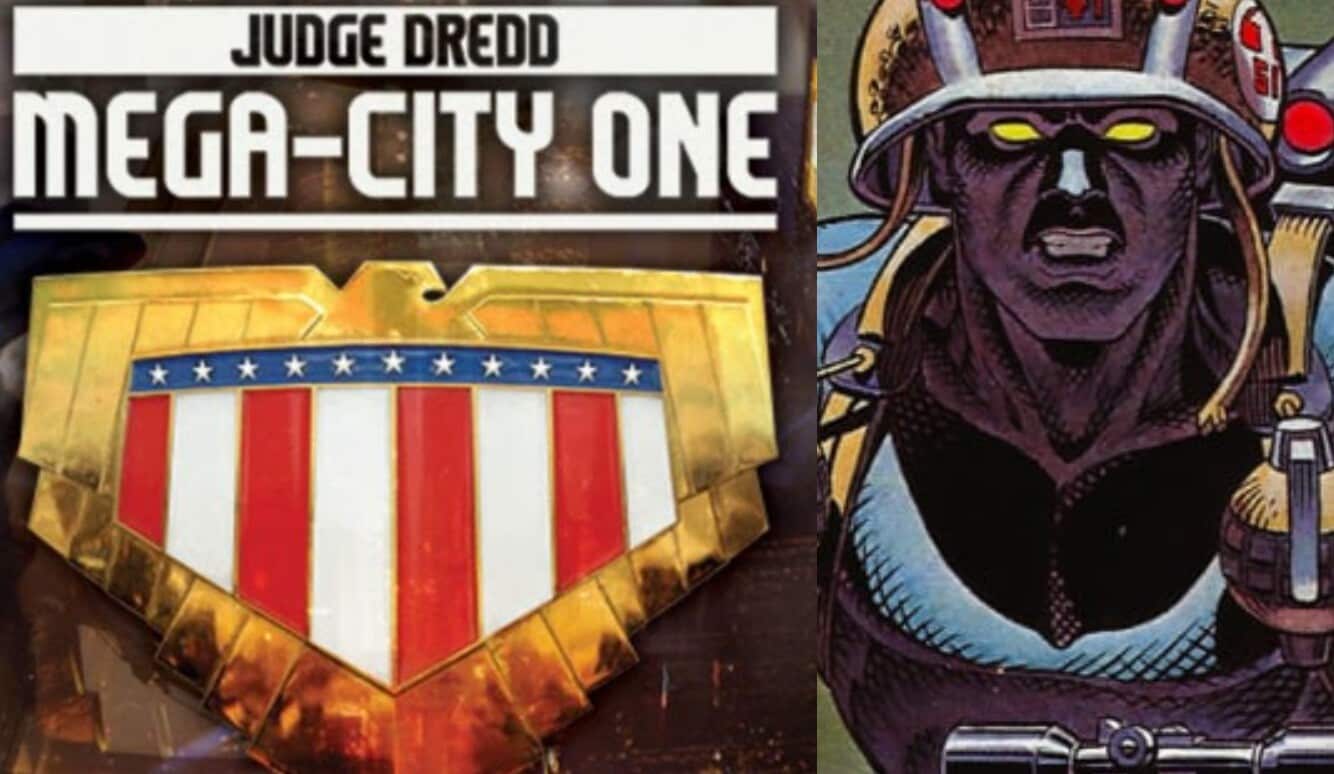 New York Comic Con is a massive event every year that brings the absolute best in comics, movies, TV, games, and more all together for fans to ingest in droves over the 4 day extravaganza. While Marvel and DC comics were represented en masse, some of the smaller, yet some say better, publishers were also in attendance. I was fortunate enough to get some time with Mike Molcher of 2000 AD, and ask him not only about the vast array of comics in their collection, but also some upcoming projects like the Judge Dredd: Mega-City One TV show and an upcoming movie for Rogue Trooper.

Well, I’m Mike Molcher, otherwise known as Molch-R, and I am the PR director for the galaxy’s greatest comic, 2000 AD. Over 40 years of some of the greatest comics you’ll ever read. The starting points for so many massive talents you know now, such as Alan Moore, Grant Morrison, Jock, Simon Bisley. It’s a weekly anthology title, still published in the U.K., still in the newstands. We’re predominantly a newsstands comic book. But the collections really are so incredibly wide ranging in the subject matter. Everything from fantasy to sci-fi to horror and all the way back again to genre mashups and whatnot.

Bear in mind, we also own the archive of IPC, the old publishers of 2000 AD. We purchased their archive, going back about 100 years. So we have the Treasury of British Comics line that is reprinting classic British comics. And that is just an endless parade of really great characters and strips. So you get things like ‘Misty’, which is a female led supernatural horror stuff. You get things like ‘The Steel Commando’, which is a comedy WWII strip. And things like ‘Battle & Action’, which was so formative in the lives of so many of the creators now. I’m thinking about Garth Ennis, in particular.

So, when people come to us and say, ‘what are you about?’, we’re all about everything, really. Take your pick.

Probably the most famous character to come out of 2000 AD is Judge Dredd. With talk of a long form TV series in the works, Judge Dredd: Mega-City One, what exactly can you tell us about this project?

(Mike chuckles) Work is ongoing. There’s not much more than that, unfortunately. Think ‘Hill Street Blues’ set in the world of Judge Dredd. We’re looking at an ensemble cast, really exploring the world, seeing it from the point of view not of Dredd, but of those who work around him and the kind of crazy crimes and the general madness that you get in a city of 400 million people confined to a much more smaller space. Yeah, work is ongoing at the moment. There is a lot of speculation and what not going around – we’re just at that point where you can’t say anything. (chuckles again)

I would be hard pressed not to ask, but with Karl Urban being very vocal about his love of the character, and his willingness to return for the series, is there any chance of his return?

Well, there’s always a chance. There’s a chance that I’ll grow 50 feet tall. We’ve not moved on to casting yet. We’ve had conversations with Karl, as he’s said before, but it’s still at that stage where we can’t go down that road yet.

Well, Duncan Jones, director of Moon, Warcraft, and Mute, he’s writing and directing the Rogue Trooper movie. Things are moving into, kinda, concept stages for various elements. The script is at a point that, I believe, he’s happy with it. So, hopefully, we’re moving on. The thing is, these things just take time. We own our own studio now [Rebellion Studios] in the U.K., in a place called Didcot, about halfway in between London and Oxford, where we’re based. It’s an old printworks that’s been converted into a film studio. So, filming will take place there.

In the meantime, we’re looking at all the other properties we have available and talking to other companies about their interest in our massive back catalog. So, it’s at an interesting stage with Rogue Trooper. We’re moving it forward, we’re really looking forward to being able to talk about it in a little while. Duncan’s great on Twitter, always updating people as to where he’s at, and he’s very enthusiastic about it, which is fantastic.

With you now owning your own studio, could we see a connected film universe for 2000 AD?

I don’t see any reason why not. I’m not necessarily sure it’s the route we’re going down, simply because so many of these strips exist in their own universe. To make them fit together in any way, you’d probably have to introduce elements that change things somewhat. I think it’s just great stories and that’s what we’ve always been about. That’s what 2000 AD is all about.

Rebellion’s mission is to get these stories told in as many mediums as possible. I love reading this stuff and about introducing people to a world of comics that they may not have ever encountered before.

Mike also discussed some books coming out, and highly recommended Brink, which is ‘True Detective in space’. All in all, if you’re not checking out 2000 AD, you’re missing out. Make sure you check out their site, and get your hands on some of the best comics you may not be aware of right now. And, we at ScreenGeek will keep you all up to date on the latest news when it comes to Mega-City One and Rogue Trooper.

Are you a fan of 2000 AD? Are you looking for to Judge Dredd: Mega-City One and Rogue Trooper? Let us know in the comments below!