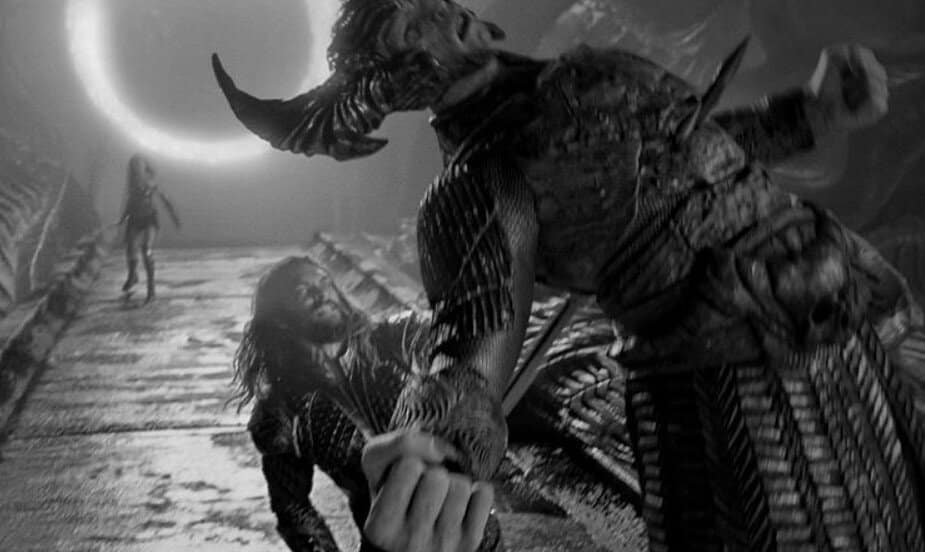 Fans have been clamoring for a Snyder Cut of the failed Justice League movie for a while now. When the director of Man of Steel and Batman v Superman, Zack Snyder, left his third installment, he was replaced by Joss Whedon. Snyder had some family issues and unfortunately couldn’t finish his vision. He often compared his three installments to the original Star Wars trilogy. Whereas Batman v Superman equaled Empire Strikes Back. Warner Bros already had Whedon on board to helm a Batgirl film. So with Snyder gone, and Whedon’s previous success with Marvel’s Avengers, they tasked him with completing the film. But according to several sources, Snyder had the film pretty much complete. Thus, the fabled Snyder Cut. Aquaman actor, Jason Mamoa has claimed he has seen the definitive film. And he has joined the campaign to release Snyder’s true vision. The actor has recently posted an image from this Snyder Cut.

Mamoa posted the picture to his Instagram account. Notice how it shows Mamoa as Aquaman in mid-attack against the film’s antagonist, Steppenwolf. Also, notice Gal Gadot’s Wonder Woman in the background looking on. And to make the image more dramatic, it is in black and white.

The version that was released to theaters, and what fans ended up seeing, was a debacle of sorts. Whedon, with Warner Bros’ backing, called for re-shoots. This called Superman actor, Henry Cavill, to return. He was in the middle of shooting his next film, Mission Impossible: Fallout. And since he grew a mustache for this new role, it had to be removed with CGI for his further Superman appearance. What has been deemed as “MustacheGate” has claimed as a debacle of its own. And it has been spoofed by many, such as the likes of Deadpool’s Ryan Reynolds.

Also, Steppenwolf was used as a stepping stone for the much grander villain, Darkseid. Now it looks as though Darkseid has been removed from the DCEU. And in turn, Steppenwolf was watered down in the Whedon-Cut. Furthermore, a post-credit scene was added featuring Jesse Eisenberg’s Lex Luthor and Joe Manganiello’s Deathstroke. This was to set up the Legion of Doom for a sequel. But from poor results, it looks like Luthor and Deathstroke’s Legion of Doom will not see the light of day either.

But with Mamoa’s help, the #ReleasetheSnyderCut Campaign will hopefully reach higher ground. And since HBOMax will feature some DC shows, like Green Lantern and Strange Adventures, fans have suggested the Snyder Cut to be available to stream via the new service.

What do you think? Would you like to see the Snyder Cut of Justice League? And does Mamoa’s post make you anticipate the definitive film even more? Let us know in the comments below or on our social medias. And as always, keep it here at Screen Geek.