Disney Being Asked To Sue Cops For Using The Punisher Logo; Marvel Responds

As anyone that’s a fan of Marvel knows, their character The Punisher tends to be one of the most violent and at times even controversial creations. Interestingly, however, this has somehow resulted in his signature Punisher symbol – the iconic skull logo – to become a symbol for Blue Lives Matter, a movement designed to emphasize the importance of police officers. However, even though only some police officers are brandishing the Punisher logo for Blue Lives Matter, it’s been enough that a few comic creators are attempting to get Disney to sue the aforementioned police officers.

It really is fascinating to see that some police officers have adopted The Punisher’s skull logo as their own, especially when you consider how the Marvel character is an antihero that kills criminals according to his own will. In fact, there are even instances in the comics when The Punisher criticizes cops for using his symbol – and, going a step further, Punisher co-creator Gerry Conway has criticized such acts.

I’m looking for young comic book artists of color who’d like to participate in a small fundraising project for #BLM to reclaim the Punisher skull as a symbol of justice rather than lawless police oppression. Respond and follow so we can DM. https://t.co/QqnHNiPvzw

To be clear, this little project is open to anyone who wants to contribute their time and effort. It’s not a paying gig, it’s intended to raise funds to support BLM. I hope to use multiple artists with a variety of styles and artistic approaches.

As to the debate over whether the Punisher symbol can ever be a symbol for justice — I agree that’s an open question. What it must *not* be is a symbol of oppression. I want to deny police the use of the symbol by claiming it for BLM. Call it irony.

Any “cop” who wears a Punisher logo in his official capacity is identifying law enforcement with an outlaw. These “cops” are a disgrace to serious police officers everywhere. They show an imbecilic level of irresponsibility and should be fired immediately. https://t.co/8mJ0Mzp89x

Now as stated above, a variety of comic creators have stepped forward and asked Marvel to sue those police officers that used the Punisher logo without any legal permission. The comic creators that suggested such include Mags Visaggio, Matt Wilson, Eric Palicki, Kat Verhoeven, and a variety of other comic book creators as well.

it’d be great if marvel started issuing cease-and-desists for the misuse of the Punisher symbol.

If Disney and Marvel really want to make a big gesture right now (besides committing $100 million to causes instead of 5), they could immediately demand police stop using the Punisher logo and sue departments that continue to

Disney famously sued a daycare over murals featuring their characters.

How about suing police departments who’ve co-opted the Punisher skull?

You might want to stomp on how the Punisher symbol, which belongs to you through Marcel, is implemented as a hate symbol

Here are some photos of Detroit police apparently from today. Can anyone explain the skull? Given the use of the totenkopf by the SS, doesn’t it seem just a little bit inappropriate?? pic.twitter.com/j3KES75kcb

At a time when people have become incredibly upset with police forces nationwide, especially following the death of George Floyd and the violence which occurred during the resulting protests, it does seem especially inappropriate for police to use the symbol of The Punisher of  all things to promote their “Blue Lives Matter” campaign.

Marvel hasn’t released a statement yet, but when a spokesperson was asked for their stance on the matter, they simply pointed to Punisher #13 which was released last year – and featured this: 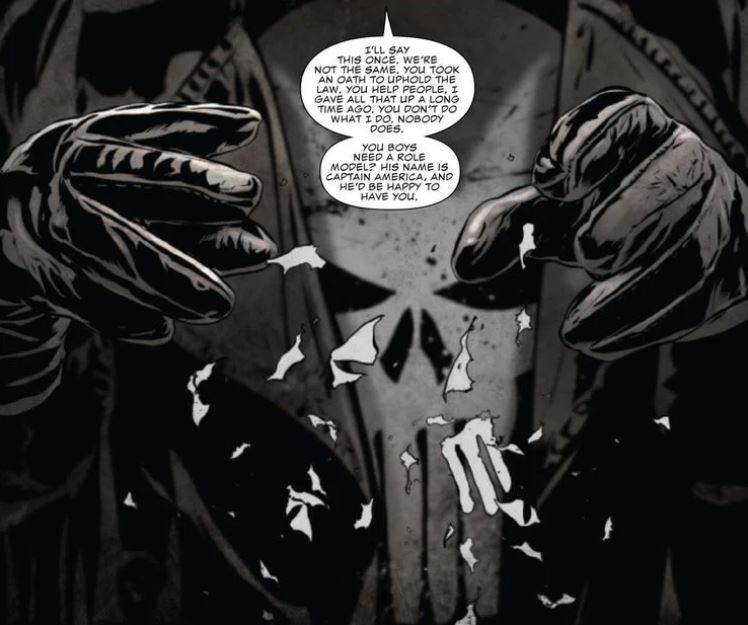 “I’ll say this once, we’re not the same. You took an oath to uphold the law. You help people. I gave all that up a long time ago. You don’t do what I do. Nobody does. You boys need a role model? His name is Captain America, and he’d be happy to have you.”

While it’s unclear if Disney will yet take legal action, it would allow for the logo to stay out of any political agendas and keep it where it belongs – only with The Punisher himself.