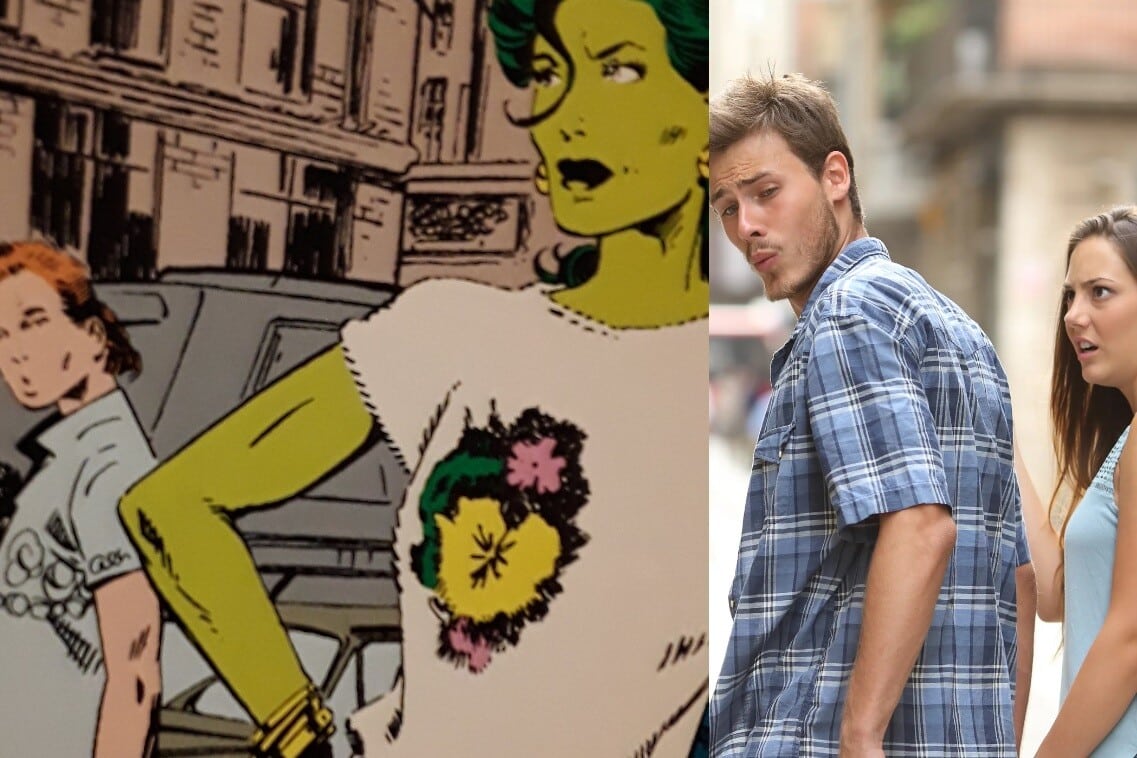 Unless you’ve been living so far off the grid that you don’t even know what color television is, much less the internet, you’ve more than likely know what a meme is and have seen the distracted boyfriend meme. It has been used ad-nausem, with countless variations and subtext, to the point where teachers are using it in lessons and soccer moms are using it on their Facebook accounts. It has pretty much run it’s course in popularity, but it still lingers in pop culture. But, what if I told you that this meme that started in 2017 may just have an earlier version of itself that’s over 30 years old and stars everyone’s favorite lawyer/gamma radiated Marvel hero.

Twitter user David Yoder took notice of a 1989 issue of Sensational She-Hulk. Issue #8 shares a very similar moment where Jennifer Walters, aka She-Hulk, is lost in thought on the streets of New York. As she contemplates what she has on her mind, a man walking with his girlfriend can’t help but notice the stunning beauty of the heroine. So much so that he makes the obvious ‘oooh’ face while his girlfriend stares at him in disbelief and anger. On the surface, you can’t help but feel like this panel is what inspired the meme in the first place.

In fact, besides the reversed view of it, it’s damn near a perfect replica of said meme. Or should I say that the meme is a copy of this comic.

In reality, the meme was created from a photo taken by a Spanish photographer named Antonio Guillem as part of an art project on infidelity. This picture was meant to be a funny take on the subject, showcasing a boyfriend so obviously straying right in front of his significant other as a beautiful woman walks past. While it’s not likely that the three decades old comic book inspired the photo taken in Spain, but it does lend some credence to the ‘shared consciousness’ theory that all ideas transcend the world and every being.

Besides all the metaphysics of it, it is quite an interesting turn of events to see this comic book panel appear to share the same theme as a meme from 2017.

What do you think of the She-Hulk ‘distracted boyfriend’ panel from Marvel? Let us know in the comments below!

Continue Reading
You may also like...
Related Topics:Marvel, meme, She-Hulk