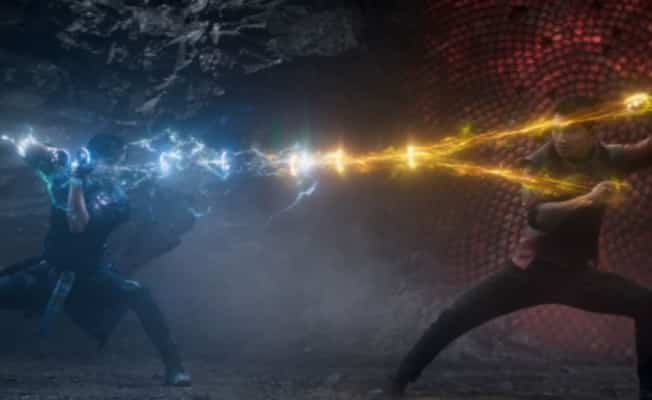 Marvel Studios has been expanding the MCU on a multiverse scale. The Disney+ show Loki opened the door to those notions with the introduction of the Kang the Conquer and what might be the Multiverse War. Shang-Chi and the Legend of the Ten Rings on the other hand brings us back to a more personal and earthbound story to help introduce new characters. Something that was done in their Phase One lineup that helped the audience connect with the characters.

It may be true that this trope could be seen as old or tiresome – but with this movie, it becomes a great reminder that Marvel Studios still has it and can put a refreshing spin on their skill to tell an origin story.

Shang-Chi and the Legend of the Ten Rings, directed by Destin Daniel Cretton, takes the cast Simu Liu, Awkafina, Tony Chiu-Wai Leung, and Meng’er Zhang on a journey that focuses on family, legacy, destiny, and mixes the right amount of Kung-fu, action, drama, and comedy. The plot follows Shang-Chi (Liu) who is destined to inherit and lead the terrorist organization the Ten Rings from his father Wenwu (Leung). However, with the aid of his friend Katy (Awkafina) and sister Xialing (Zhang), Shang-Chi spectacularly fights against that.

The plot written by Dave Callaham and Andrew Lanham finds a great balance with the pacing. The start of the movie televises this idea with an epic battle of Wenwu’s rise to power and his courtship with Shang-Chi’s mother, Jian Li, played by Fala Chen. The progression of these scenes and interaction between characters is like a carefully choreographed dance that continues to translate well through the movie.

The story takes a few serious turns when Shang-Chi and Wenwu must comfort their past in a thought-provoking and realistic way. The writers understood that Shang-Chi and the Legend of the Ten Rings couldn’t feel like it belongs solely in Phase One of the MCU. Instead, they were able to cleverly showcase a journey between these characters’ lives—already in progress—as they make choices that will forever change them.

Side Note: Yes, the film goes over the whole Mandarin issue that has been a topic since Iron Man 3, and Callaham and Lanham squash it once and for all.

Though some might see Shang-Chi and the Legend of the Ten Rings’ main sailing point is the action, I think the acting should garner a lot of notice.

There’s no way around this but I love the performance from the cast. The chemistry between Shang-Chi and Katy is a perfect match. The two have great banter that some might consider “attraction” or “love interest” but Liu and Awakfina and handle these characters in a genuine supportive way. Katy has Shang-Chi’s back in a “ride or die” style while Shang-Chi helps Katy see her potential – and the trajectory of their arcs does not outshine one another.

Even Zhang and Leung are given moments to show off their acting talent in a heartfelt manner that isn’t forced or causes a hiccup in the flow of Shang-Chi and the Legend of the Ten Rings. I found myself feeling so much sympathy for Leung’s Wenwu as a man dealing with loss and how that can be manipulated.

There are some minor issues when the action finally hits the present-day setting of the movie, but it doesn’t take a whole lot away from the movie. In fact, Cretton’s action direction was amazing to watch on screen. The director didn’t rely on bullshit techniques to show off the battles and allowed fight choreographer Andy Cheng’s work to speak for  itself.

Each set-piece ramps up to an awesome and magnificent action-filled conclusion that fits perfectly with the themes and tone of the movie. It’s like Marvel Studios told Cretton to crank the climactic battle to an 11 and throw in some dragons in there for good measure.

As a fan of Asian cinema, this was right up my alley. Shang-Chi and the Legend of the Ten Rings is another step in the direction for Marvel Studios when they want to take a break from the cosmic part of the MCU. The writing, cast, and direction are well-placed cogs in the movie’s machine to make this 2-hour movie easily flow by. I really can’t wait for these characters to meet other members of the MCU and find out what’s in store for them.