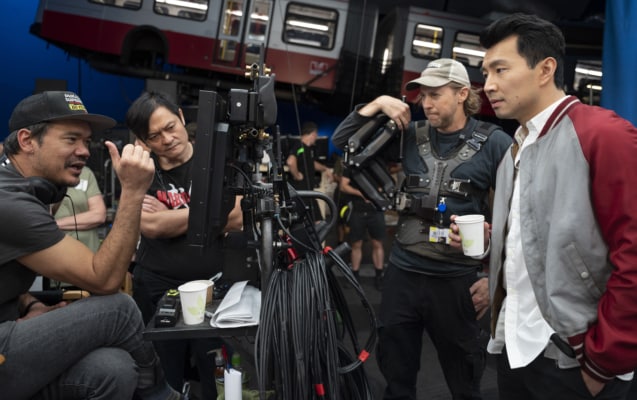 Marvel’s Shang-Chi and the Legend of the Ten Rings is finally upon us. The first Asian-led Marvel Studios movie is set to be a big hit at the box office and it rightfully deserves to be. The top-tier cast is filled with veteran actors Tony Leung, Michelle Yeoh, and Sir Ben Kingsley alongside rising stars Simu Liu, Awkwafina, and Meng’er Zhang. Directed by Destin Daniel Cretton, the movie is a refreshing look into the MCU that steps away from the overtly cosmic side that has been the norm for some time.

Liu, Zhang, Cretton, Kingsley, and Awkafina were joined with Marvel Studio head honcho, Kevin Feige to discuss the inner workings of Shang-Chi and the Legend of the Ten Rings.

Cretton has been primarily known as an indie director before putting in his name in the hat to direct the movie. His films Short Term 12 and Just Mercy are laced with great character studies on individuals with a troubled past—something that could do with Cretton’s involvement as a social worker before attending film school.

“I mean that job affected my entire life, my world view,” Cretton said when asked how his experience impacts the way he approaches his projects.

“I feel like the stories that I am drawn to are a combination of humor, optimism but also not shying away from the very real darkness that we and [the] pain that we all experience as humans. And I think this movie really does encapsulate a lot of the things that I really believe in.”

Kingsley added more to Cretton’s comment regarding the director’s motives for telling the story of Shang-Chi. Kingsley stated, “They are motives to— they are life-enhancing and they’re not patronizing because they do introduce in a beautiful way, memory, ancestry, loss, and families torn apart and reunited and reconfigured.”

Cretton wasn’t the only one to get a little help from Kingsley. Zhang, who was a theater actress before coming to Marvel Studios, shared that her transition to film was indeed different. She felt lucky to work with many of the actors—specifically Kingsley who was always there to help. When she asked for advice from Kingsley on performing from theater to film, she stated, “He said, ‘So when we are on stage, we are landscape artists. And when we are in front of a camera, we are portrait artists.’”

There is an understandable amount of pressure when it comes to making a big tentpole movie let alone a Marvel Studios production. A lot is riding on the success of these movies because audiences are expecting a certain quality these films bring. This did cross Cretton’s mind when taking the job as director of Shang-Chi and the Legend of the Ten Rings. The director let be known that he had a “giant personal fear of stepping into a movie like this.”

Fortunately for us and the people over at Marvel Studios, Cretton got some advice from Black Panther director, Ryan Coogler.

The director resumes, “The thing that Ryan said to me, which really eased my mind, was the pressure is hard. It’ll be the hardest thing potentially that you have done up to this point, but none of that pressure or none of those complications come from the people that you’re working with or for.”

Cretton wasn’t the only one feeling the stress of Shang-Chi and the Legend of the Ten Rings. Up and coming lead actor, Liu, was not afraid to disclose his thoughts when it came to sharing the scene with many legendary actors. Liu revealed that “it was like imposter syndrome every single day” and that his “nerves were sky high” during filming.

Liu continues, “I was an actor from Toronto, and I really had never allowed myself to imagine being a part of the MCU.  I mean, it’s the craziest dream that someone can possibly dream.” He added, “Every day it was like waking up to another dream.”

Of course, the topic of the now-infamous tweet from Liu to Marvel Studios was brought up. Liu has said in past interviews that it was that tweet that got him the role of Shang-Chi. Feige decided to burst that bubble but did it in a very nice way.

The head of Marvel Studios stated:

“Unfortunately, Simu, it was not your tweeting. It was your acting ability, your constant professionalism, and then multiple reads and meetings that you did that got you the job.”

Well, that settles that.

Shang-Chi and the Legend of the Ten Rings is in theaters now.