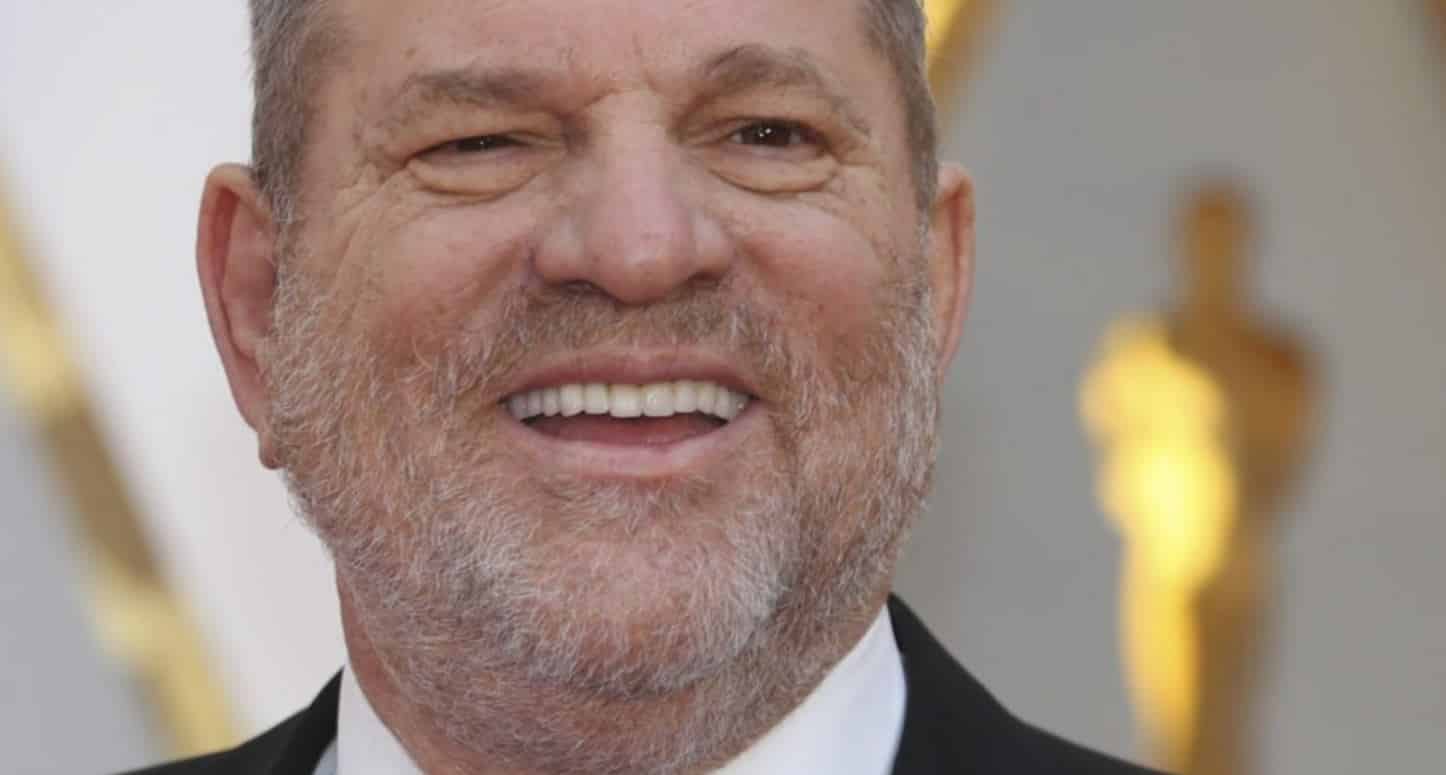 If you’ve watched any recent Award shows lately, you’ve probably been subjected to political opinions of various different celebrities. Some would call it lecturing, some like it. Whatever you view it as, a lot of the stuff that gets said is pretty hypocritical and more so with the Harvey Weinstein scandal recently coming to light.

The fact is, stuff like this has been going on in Hollywood for quite some time now and it’s often been ignored. For whatever reason, celebrities like actors, actresses, directors, etc. are all viewed as untouchable and even if they were to be accused, no one could possibly believe the allegations would ever be true.

Now, I’m not saying that every allegation thrown at someone is true, but in the case of Harvey Weinstein, this apparently dates back almost 30 years and given the disturbing audio with him that recently surfaced, I’d say it’s pretty obvious something is wrong here.

The celebrities that were close with Weinstein will deny they knew any of it was going on, but there’s really almost no way that can be.

I’m not saying every single celeb that has been in contact with him knew, but based on the recent article from The New York Times, it’s been rumored that Weinstein behaved the way he did, but no one did anything.

Meryl Streep called Weinstein ‘God’ and ‘The Punisher’ back in 2012:

“The disgraceful news about Harvey Weinstein has appalled those of us whose work he championed, and those whose good and worthy causes he supported. The intrepid women who raised their voices to expose this abuse are our heroes.

One thing can be clarified. Not everybody knew. Harvey supported the work fiercely, was exasperating but respectful with me in our working relationship, and with many others with whom he worked professionally. I didn’t know about these other offenses: I did not know about his financial settlements with actresses and colleagues; I did not know about his having meetings in his hotel room, his bathroom, or other inappropriate, coercive acts. And If everybody knew, I don’t believe that all the investigative reporters in the entertainment and the hard news media would have neglected for decades to write about it.

The behavior is inexcusable, but the abuse of power familiar. Each brave voice that is raised, heard and credited by our watchdog media will ultimately change the game.”

Which is a little odd, considering she seems to be okay with Roman Polanski drugging and raping a 13 year old, even going as far as feeling sorry for him and giving him a standing ovation at The Oscars:

Huffington Post has also penned multiple pieces on why we need to forgive Roman Polanski with one actually titled:

Why I defend Polanski, More Than Ever

Interesting. You’d think people like Streep and websites like HuffPo who are so for women’s rights and whatnot wouldn’t be okay with someone drugging and raping a 13 year old girl, wouldn’t you?

It’s okay if you’re an artist though, apparently:

Polanski has also just recently been accused of raping even more women, but I haven’t really heard Hollywood say much about it.

Polanski himself recently in an interview essentially admitted to child rape and said that he is over it:

“As you know, Samantha Geimer has been asking for over 30 years for this thing to end. But, I’m sorry the judges who dealt with it the last 40 years were corrupted, one covering for the other … maybe one of them will (eventually) stop doing it.”

Before closing by saying:

“As far as what I did: It’s over. I pleaded guilty. I went to jail. I came back to the United States to do it, people forget about that, or don’t even know. I then was locked up here (in Zurich) after this festival. So in the sum, I did about 4 or 5 times than what was promised to me.”

It should be noted that the director served a total of 334 days in prison for the crime.

Another interesting note would be Victor Salva, the director of the popular  Jeepers Creepers horror franchise. Salva was actually convicted in 1988 for sexually molesting a 12 year old boy while working on his 1988 film, Clownhouse. The incident was even filmed by the director. He served 15 months in prison before being parole in 1992. 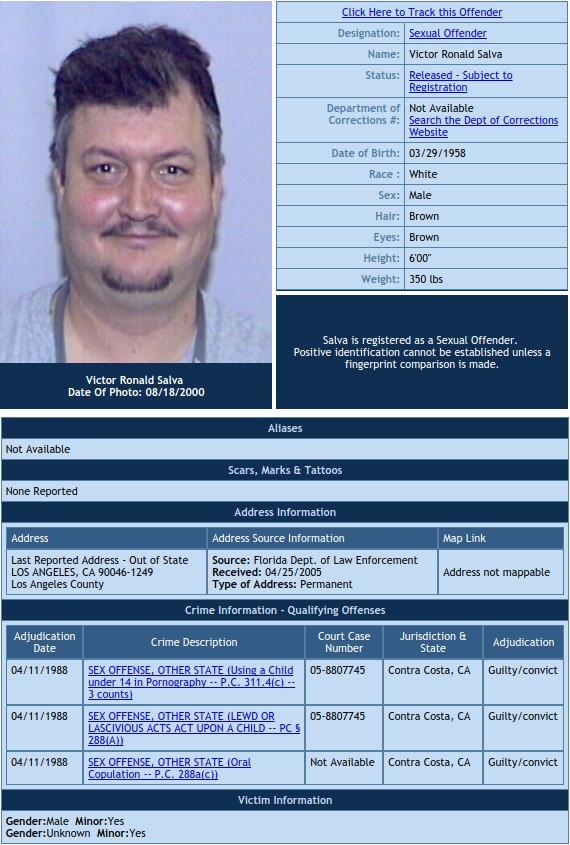 That didn’t stop Disney from hiring him to direct Powder in 1995, a movie in which the director worked with children. Nathan Winters, Salva’s victim, said this back in 1995:

“I can’t believe [Salva] is allowed to work with children again,” Winters said. “He should not be allowed around children ever again.”

He actually went on to direct quite a few movies after that, and his latest movie, Jeepers Creepers 3, even features a scene that tries to justify child molestation. The actor who played The Creeper character in the franchise, even defended Salva for what he did, saying the director deserves a second chance:

“The truth is, Victor’s not the same guy he was 33 years ago. He’s just not. Most people aren’t. I believe people deserve second chances. It was a horrible thing that happened and a horrible mistake that Victor made and nothing can change that. But I know who the guy is today and he’s not the same person and I’d like to see him have a second chance.”

While this isn’t every single case involving this sort of stuff out there, it should become clear to you that this has just been the norm in Hollywood. People just look the other way.

In 2004, Weinstein reportedly could have been stopped, but Russell Crowe and Matt Damon are said to have killed a New York Times piece from running that would have exposed him. Damon denied this, saying:

“It didn’t even make the piece that she wrote. As I recall, her piece just said that Russell and I had called and relayed our experience with Fabrizio. That was the extent of it and so I was very surprised to see it come back. I was never conscripted to do anything. We vouch for each other, all the time, and it didn’t even make her article. Whether it didn’t jibe with her storyline … it was an incomplete rendering of someone that I was giving but I had perfectly professional experiences with Fabrizio and I didn’t mind telling her that.”

The writer of the piece actually endorsed Damon’s statement:

I endorse Matt Damon’s statement. He called me briefly,wasn’t informed – nor shld he have been – abt investigative aspect of piece. @thewrap https://t.co/kTbOdYY7C8

The thing that is just so hard to believe about all of this is that Weinstein is said to have paid off victims for decades, and these actors who were said to be close friends with him knew nothing? Someone as powerful and well known by everyone (even other powerful people outside the entertainment industry) and no one suspected a thing?

Like the headline reads, though, can you really be surprised?

When you add up the fact that stars are just okay with showering praise on people like Polanski and letting someone back into the industry like Victor Salva who filmed himself molesting a 12 year old, is it really that shocking?

With recent reports saying that Weinstein is flying to Europe, who knows? Maybe the Academy will award him with an Oscar in a few years.

Continue Reading
You may also like...
Related Topics:Harvey Weinstein, Hollywood