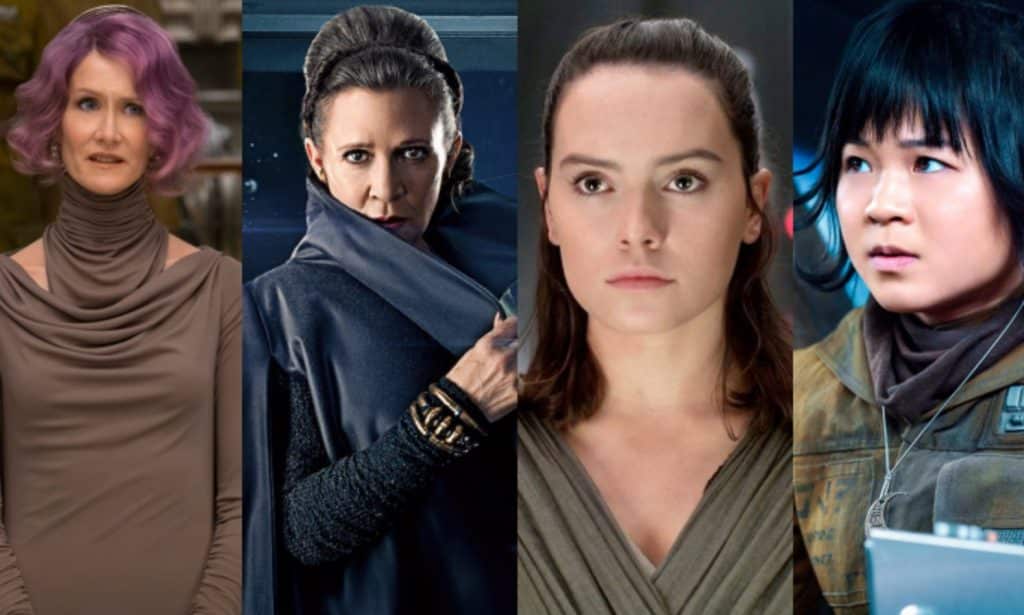 After years of female characters in films being reduced to either damsels in distress or love interests, it seems like Hollywood is finally giving us more strong women in our films. One of the most notable franchises to do this is Star Wars. However, a small minority of fans are none too happy about this invasion of their fandom and have taken matters into their own hands by creating a ‘De-Feminized’ cut of the latest film, Star Wars: The Last Jedi  – …yes, I’m afraid you read that right.

Men’s Rights Activists took it upon himself to edit Rian Johnson’s entry into the saga removing many of the scenes which empower it’s female characters due to his inability to comprehend strong female characters in a world where we have Aliens and Spaceships as a regular occurrence. He clearly had his work cut out for him as the resulting edit of the film, aka ‘The Chauvinist Cut‘, clocks in at a mere 46 minutes. Be warned the following information may include spoilers for the actual film.

Apparently, some of the changes made include the exclusion of Vice Admiral Haldo entirely with Poe Dameron now sacrificing himself in the pivotal scene. Similarly, the entire Canto Blight scene has been excised with Kelly Marie Tran’s Rose Tico and her sister being referred to as ‘Asian Chick’ or ‘China Girl’.

“Leia never scolds, questions nor demotes Poe. He is a respected and very skilled high-ranking member of the resistance.“

“When there’s a scene where a woman is cut in making some important statement that can be substituted by another statement by a guy, then she gets cut out. Works pretty well actually.“

“Wookie eats the Porg, or at least isn’t interrupted in trying to do so.“

The editor also makes sure that the male characters are never undermined by the females with Leia no longer scolding or demoting Poe for his reckless actions at the start of the film, despite it leading to the deaths of multiple rebel pilots. He also removes many of Luke Skywalker‘s dialogue which paints the character as ‘Whiny’ or ‘Reluctant’. He also looks to tone down Rey’s power levels, because naturally, she couldn’t possibly be ‘Powerful’.

He also goes out of his way to make sure that Captain Phasma is not the bad ass that she is in the film, with Finn now defeating her with a single blow. The editor’s feeble excuse for this being ‘Women are naturally weaker than men, she isn’t force-sensitive, and we know nothing about any exo-skeleton in her suit’. Again, there are aliens in this film… Overall, it’s sad to see that men can be so intimidated that by strong females, fictional ones I may add, that they go to such lengths to deny their existence. I am still holding out hope that this cut of the film has actually been made in an ironic way to show just how ridiculous the insecure fan reaction was for the film. Obviously, the there are complaints to be made about Star Wars: The Last Jedi, but the inclusion of strong female characters sure as hell ain’t one of them.

The Last Jedi director Rian Johnson has even responded to the film:

The goal is never to divide or make people upset, but I do think the conversations that are happening were going to have to happen at some point if sw is going to grow, move forward and stay vital.

To the MRAs who created the 46 minute fan edit of The Last Jedi erasing the female characters: pic.twitter.com/a8PpfX7gEW

It is impossible not to look at “MRA Star Wars” and not turn your nearest male friend to say, “come get your boys.” While sobbing with laughter.

Let’s be honest, the MRA neckbeard that made an edit of The Last Jedi without all the women was just trying to mirror his own womanless life.

TIL that MRA bros spend hours fanediting films like The Last Jedi to remove “feminism.” I guess if you can’t date anyone you have a lot of free time on your hands.

Does the 46 minute MRA Last Jedi cut edit out Poe hugging BB8 because feelings aren’t alpha? I must know.

Instead of this ’46-minute woman-less’ cut of The Last Jedi, I will instead create an Oscar Isaac-only cut of all Star Wars movies and ship it to @LCScreenTalk because if I’m going to hack at a movie like that, I may as well actually bring joy to somebody who’s not a sexist! pic.twitter.com/giVvujCyLJ

So some guy edited out all the women In #LastJedi so you want to remove awesome characters out of the universe like Rey, Jyn, Her a, Sabine, Dr Aphra, Asokha, Iden Versio, Rae Sloane, Norra Wexley who add so much to the universe yeah I think not.

Daisy Ridley’s Rey being a bad ass certainly hasn’t put fans off the film, as just last week it was named as the highest grossing film of 2017, making over $1.2 billion at the global box office. If you are the type of person who can’t look past a woman making a difference on the screen however, you can check out Star Wars: The Manchild Cut on Torrent sites across the net, though it first popped up on Reddit.

What do you think? Will you be checking this out? Do you have a problem with Rey being a badass? Let us know below!