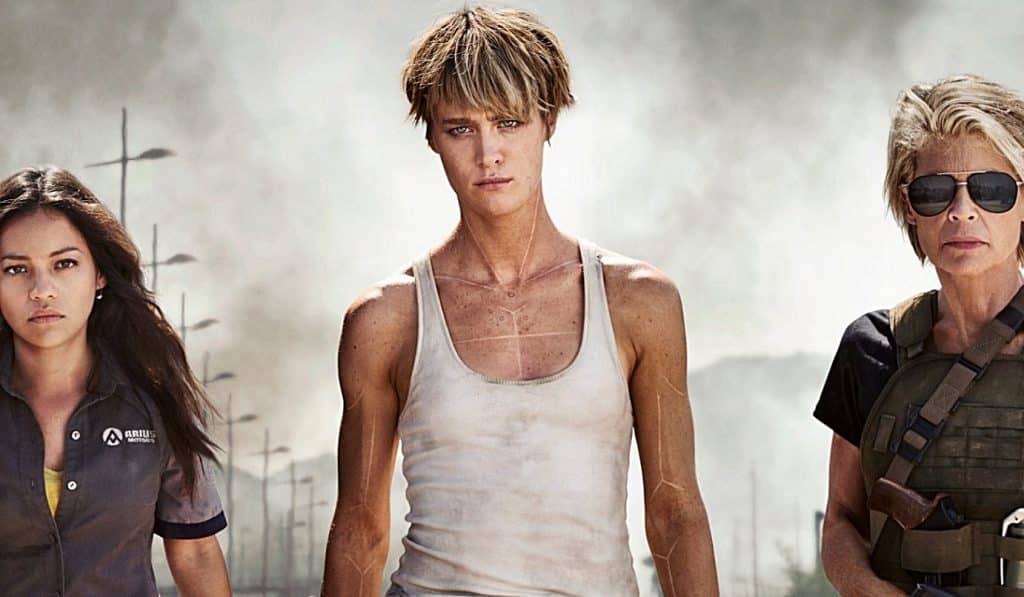 Terminator 6, the untitled sixth installment of the Terminator franchise, has recently started filming for release next year. Natalia Reyes, Mackenzie Davis and Linda Hamilton had been confirmed on the movie a while ago, and now in the first official promotional image we see the three Women together in action.

Back in June we got a look at Mackenzie Davis and Linda Hamilton in character in some behind the scenes set photos but this is the first time we have seen Natalia Reyes’ character. She will play Dani Ramos, alongside Davis as Grace and of course Linda Hamilton is reprising her role as Sarah Connor.  Arnold Schwarzenegger will also be returning alongside Gabriel Luna as the title character, Jude Collie will be a young John Connor and Diego Boneta is said to be playing a significant role.

Although plot details are being kept under wraps, this instalment of the Terminator franchise will act as a direct sequel to James Cameron’s original films and ignore the most recent three sequels, with the events taking place after Terminator 2: Judgment Day, so it is following the same sort of model as this years Halloween movie. James Cameron said:

“This is a continuation of the story from Terminator 1 and Terminator 2. And we’re pretending the other films were a bad dream,Or an alternate timeline, which is permissible in our multi-verse. This was really driven more by [Tim] than anybody, surprisingly, because I came in pretty agnostic about where we took it. The only thing I insisted on was that we somehow revamp it and reinvent it for the 21st century.”

What do you think of the first look? Will you be watching the film? Tell us your thoughts in the comments!

Continue Reading
You may also like...
Related Topics:Terminator, Terminator 6

Hairtology: The Real Star Of The ‘Mission: Impossible’ Films
Early Reactions To ‘The Meg’ Movie Have Hit The Internet
Advertisement
To Top