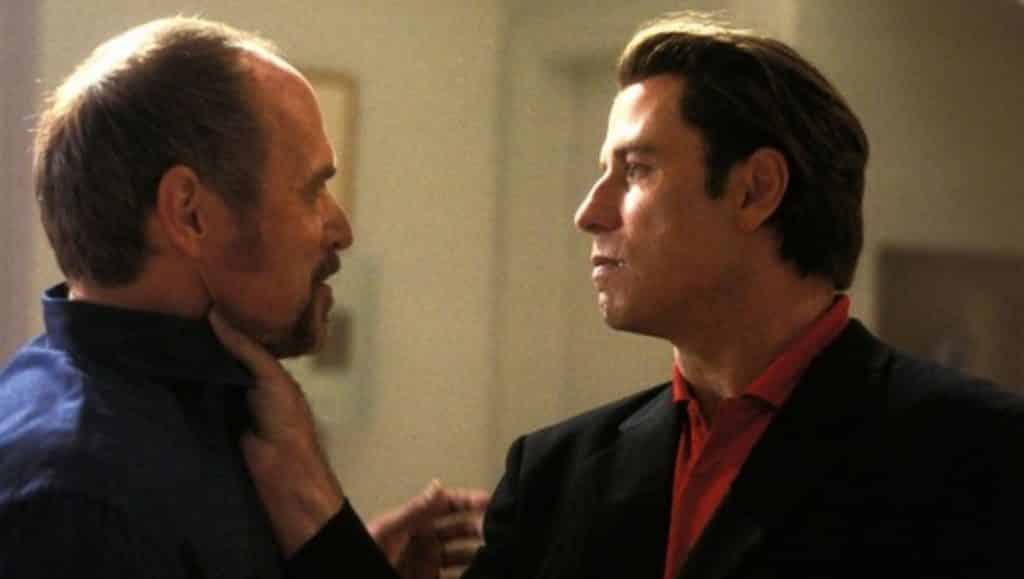 It seems as though some pretty disturbing cases of sexual misconduct have been buried in Hollywood for quite some time now. A rampant string of accusations are currently facing quite a few major Hollywood stars at the moment and one that appears to have been unburied involves actor John Travolta.

Radar Online says that they have obtained a police report that says Travolta was accused of what the report deemed homosexual battery back in 2000:

John Travolta has been named in a criminal complaint by a 21-year-old masseur who accused the Pulp Fiction star of sexual battery.

RadarOnline.com has exclusively obtained the explosive police report that charges the devout Scientologist, 63, of harassing a male spa employee during a late-night rub-down.

The incident allegedly took place at LaQuinta Hotel in Palm Springs, California, at their spa, when Travolta had requested it for personal use. The report goes on to say that Travolta groped the man’s bare buttocks, indecently exposed himself and made lewd remarks about gay fantasies. The accuser claims that Travolta wanted more than just a massage:

During the massage, the star kept removing the towel “exposing” his bare buttocks, according to the never-before-seen official report. After the masseur administered a body scrub treatment, he says Travolta told him “he was very attractive and that he had gotten him ‘excited.’” Travolta then asked the masseur to join him in the spa’s steam room, “so he wouldn’t be alone,” says the man, who complied with the request.

Totally naked after dropping his towel, Travolta then offered to demonstrate his own massage techniques on the masseur. As the man lay on his stomach, Travolta reached under his towel and began to rub his inner thigh. Then the actor began rubbing [the masseur’s] bare buttocks as well as in the groove between.

As the masseur was packing up his massage table that had been set up in Travolta’s room, he claimed the actor peppered him with suggestive queries, including “what he would do if he ever had sexual encounter with another man,” and added “if so, tell him what he would do so [Travolta] could have something to fantasize about.’”

Traumatized by what happened, the 21-year-old reported the incident to Palm Springs Sheriff’s Department, who sent an officer to the scene.

The accuser went on to file a police report, filed by Officer Mark Peters, which adds even more disturbing context:

[Redacted] told me he asked Travolta what area of the body he wanted him to concentrate on the most, and Travolta replied the buttocks. He said that during the course of the massage, Travolta kept removing the towel covering the area, and exposing his buttocks. [Redacted] told me it is improper to remove the towel, so he kept replacing it.

[Redacted] said after the massage was complete they went into another room where he performed what he called a “Citrus Scrub” on Travolta. He said that during the procedure, Travolta told him that he was very attractive and that he had gotten him “excited.”

He said shortly afterward, Travolta removed his towel and was nude. He told me that Travolta then asked him if he would like to see some of the massage techniques that he (Travolta) likes. When the “Citrus Scrub” was complete, they moved to the steam room, where Travolta asked if he would accompany him, so he wouldn’t have to sit alone.

It goes on to say that Travolta began rubbing his “inner thigh” area and uncomfortable with what was going on, got up and left the steam room and went to the shower –  but Travolta followed him and asked him if he wanted his back “soaped up”. He informed the actor that he did not want any of that, and after the shower, packed up his equipment and left – though it didn’t end there:

Shockingly, the man alleges “Travolta asked him if he had “ever had his a**hole licked buy another man,” “what would he do it he ever had a sexual encounter with another man,” and if so “tell him what he would do , so he (Travolta) could have something to fantasize about.”

It was determined, in the end, Officer Peters noted that the details don’t meet the elements of battery, or sexual battery and that the acts and statements can’t corroborated. The case was then close unfounded, and the officer advised the man to have a talk with a civil attorney.

This isn’t the first time Travolta has been accused of something of this nature. In 2012, the actor was sued over accusations that he tried to have sex with a male masseur during a therapy session at the luxury Beverly Hills Hotel – per The Daily Mail:

The married actor, who has repeatedly denied being gay in the past, was said to have touched the unnamed therapist’s genitals during a $200-per-hour massage appointment, the lawsuit claimed. The suit claimed that Travolta stripped naked – and appeared aroused – before being massaged while at the same time trying to remove the towel covering his bottom.

After the session was over, Travolta allegedly touched the man’s scrotum and penis. But the masseur insisted he pulled away and claimed he then informed the actor that he was a professional masseur and not a prostitute. Travolta is then said to have responded that ‘we must have got our signals crossed’, before adding:

The accusations are from a while ago, but in today’s seemingly never-ending exposing of Hollywood’s apparent blind-eye to this kind of stuff, Travolta probably knew it would resurface. Director/Producer Bryan Singer has also seen disturbing allegations from his past thrown back in to the spotlight, prompting him to delete his Twitter account.

In what recently started with the Harvey Weinstein scandal, powerful Hollywood players like Kevin Spacey, Louis C.K., and Brett Ratner have seen their careers fall.

Kevin Spacey has been accused of sexual misconduct by 15 different men now, including attempted rape of a 15-year-old boy.

Sadly, it seems like this has been the norm in Hollywood for some time now, so it’s good that it’s (hopefully) coming to an end, and people in the industry (the ones who are left at this point) can start paying attention and doing what made us fans of them in the first place, which is making movies.