Orion’s new reboot of the Child’s Play franchise has just been released with it’s new look Chucky Doll and reviews are looking good. Not only that, but we get to see Annabelle Comes Home in July and we get the next installment of Brahms story following on from the 2016 movie The Boy. It’s all about the dolls this year in horror so it felt like a good time to countdown the 10 creepiest dolls we have ever seen, on and off screen.

Here are the 10 creepiest dolls of all time…

Both Chucky born of the original Child’s Play and the new incarnation we have just met are both creepy as hell in their own right. 1988’s original saw the doll possessed by the spirit of a serial killer and that was what caused him to perform his evil deeds. This years origin story is more current and involves the doll being technologically tampered with and the safety measures being taken off. Both forms of the doll are unsettling in different ways and although people seemed to have mixed opinions about the new doll that doesn’t seem to have negatively impacted the reception that the new film got.

Both versions of the doll have the red hair, stripy top and blue dungarees and are synonymous with the films and the character. The main difference is that Chucky seems to have had something of a facelift. Someone people have even likened the new dolls appearance to that of Donald Trump. In my opinion, the original incarnation of the doll was scarier while the new one just looks a little mischievous. 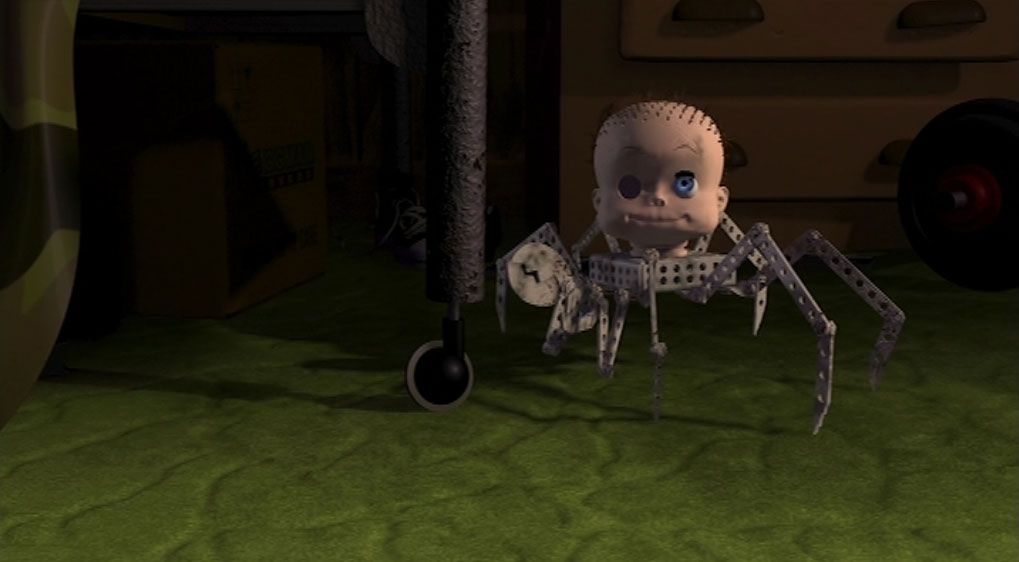 Everyone is familiar with the beloved Pixar franchise about the toys that wake up and live their lives when their owners are not around. The fourth movie in the franchise has just been released and in it Woody, Buzz Lightyear and the rest of the gang embark on a road trip with Bonnie and a new toy named Forky. The adventurous journey turns into an unexpected reunion as Woody’s slight detour leads him to his long-lost friend Bo Peep. As Woody and Bo discuss the old days, they soon start to realize that they’re worlds apart when it comes to what they want from life as a toy.

Okay so let me just start by saying i think the concept of the Toy Story movies is absolutely terrifying anyway. The thought of my toys coming alive when i left the room when i was younger would have filled me with cold dread if i really thought about it. Aside from that, there is one particular doll from the franchise that is what nightmares are made of. Babyface is the grotesque creation from Sid’s room – the next-door neighbour in the first movie. Incase you haven’t seen it or don’t remember, this psycho kid put the head of a babydoll on some spider like creepy-ass body from his other toys, and ripped one of its eyes out too. I don’t know how my younger self wasn’t absolutely traumatised by this.

Rick and Jenna are the dolls from a horror short called The Dollmaker. In the short, a grieving couple go to a mysterious doll maker to have a doll made of their deceased son that makes it appear as the boy is really there and alive again when inside their own house. There is an important guideline to the use of this doll that is, of course, not followed. The doll in this short is creepy as hell, and the entire story is truly unsettling and upsetting. If you haven’t seen it, i definitely recommend it.

First birthed in The Conjuring movies, which are based on the true life tales from the Warren family, Annabelle went on to inspire a franchise of her own which is about to have its third instalment released next month. In the upcoming movie Annabelle Comes Home, the Warren’s choose to keep the doll in their artefacts room where the doll can no longer cause any trouble. Of course, Annabelle can cause trouble there and awakens the rooms evil spirits. She ends up turning her attention to the Warren’s young daughter.

I don’t actually think the Annabelle doll looks all that creepy, aside from the crazy wide eyes. However, the stories behind her and the fact that they are arguably based in some truth, makes her a lot creepier. Even if you don’t find Annabelle that scary yourself, the fact the character has blown up with everything else in The Conjuring Universe and has a massive and dedicated following, means she still deserves a place on this list.

The Saw movies span for 8 installments now all involving terrifying ways people have to torture themselves in order to survive the sadistic traps that are set for them. In the first movie, two strangers wake up in a bathroom and must escape before it is too late, in a deadly game where even if you win, you lose something. This gory story is when we first meet Billy the Puppet.

Billy is now instantly recognizable as being synonymous with the franchise. With a white face, red spirals on his cheeks, wearing a suit and riding a bicycle. In the movies her would pop up either on a screen or sometimes riding into the room on his bike, and audio would play as if from the doll explaining the dire situation that the victim is in and the self-torture or mutilation they have to commit in order to free themselves. The character has become something of a horror icon, inspiring many a Halloween costume every year. 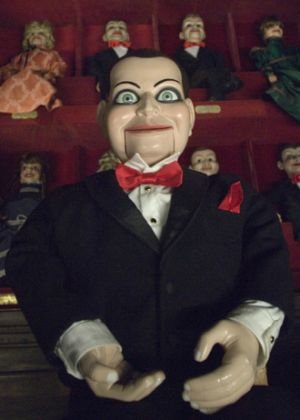 The second Billy on our list comes from the creators of the Saw franchise again, but features in the movie Dead Silence. In the story a young widower returns to his hometown after his wife meets a grisly end to search for answers to his wife’s murder. Once there, he discovers the legend of Mary Shaw, a murdered ventriloquist whose eerie presence still looms over the town As he desperately digs for answers, Jamie encounters the curse that took his wife’s life and threatens his own.

Billy is terrifying in that usual way that old ventriloquist dummy’s are, even without the creepy backstory. A lot of fans also point out how similar Billy looks to Slappy, the ventriloquist doll of the Goosebumps stories.

In 2016’s movie The Boy, a babysitter is hired to care for what she expects to be a young boy. Upon arrival she learns that she is actually expected to look after a pale faced doll that the owners treat like a real boy, which started as a way to help them cope with the death of their young son 20 years prior. When the babysitter doesn’t obey the guidelines she has been given, she comes to the assumption that the doll is alive after unexplainable and creepy events start happening.

The doll, Brahms, is creepy enough with his ghost white face and eerie resemblance to a young school-boy, but what makes the whole situation creepier is the twist at the end of, what turns out to be, a wholly unpredictable conclusion to the movie.

The movie May was released in 2002 and features an oddball outcast as the title character. The strange, lonely girl is unlucky in love and has no friends aside from a glass-encased doll named Suzy made by her mother and given to May for her birthday. In her adult life she falls for someone called Adam but scares him away with her bizarre behaviour. She then enters a brief affair with her colleague Polly, who then moves on to someone else. Heartbroken, lonely and hurting all May has, once again, is that creepy Suzie doll.

This doll is creepy enough, but when that doll gets destroyed it pushes May over the edge and she decides to make a ‘doll’ of sorts, of her own, using the body parts of her acquaintances. She names it ‘Amy’ by rearranging the letters of her own name but gets distraught when she realises her creation has no eyes to see her with. This results in her ripping her own lazy eye out of her head to give sight to her ‘friend.’ 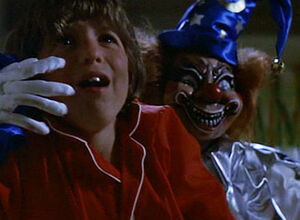 Poltergeist was released in 1982 and follows the Freeling family as ghosts invade their home and start messing with their stuff. What starts as an amusing inconvenience quickly turns sinister and the ghosts start terrorizing the family and try to kidnap their child daughter. This is one of the only inclusions on this list where the doll isn’t central to the story, but despite this still managed to freak out audiences everywhere.

Well, what’s scarier than a normal doll? A clown doll. Clowns are one of the most common phobias to have and it is completely understandable why. Well, although not a main feature of the movie and only a minor protagonist, the clown doll in Poltergeist terrified audiences everywhere. The clown doll creeps young Robbie out in the movie and he covers it with his jacket. Later in the movie the terrifying toy drags the boy under the bed and precedes to choke him. Even without that, the doll looks like pure nightmare fuel.

Sesame Street is a wholesome kids show and many kids are captivated by one of its signature characters, Elmo. So obviously, when a talking Elmo doll that says your own name was released it was super popular with kids. One particular little 2 year old boy was thrilled when he received his Elmo doll and it was all very innocent, until the doll started threatening the boy. That’s right, one day upon changing the batteries in the doll James’ mother thought she heard the doll say “Kill James.” At first she thought she was imagining the whole thing, but it kept happening. Upon contacting Fisher-Price, they told the family to change the batteries and reset the doll, but this only made the situation worse and the doll would just say kill James over and over gain. The family were then offered a refund by the company.

So, was this a supernatural occurrence or perhaps a technological mistake or interference? Or maybe the doll wasn’t saying kill James at all. Check out the video below to see what you think.

What creepy dolls would you add to this list? Let us know in the comments below!